Sitka’s Legacy Fund: How giving now can shape the future 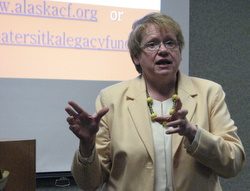 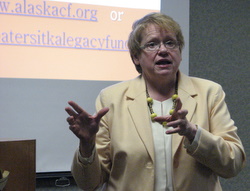 Connie Sipe, the executive director of the Center for Community, sits on the interim steering committee for the Greater Sitka Legacy Fund. (KCAW Photo/Robert Woolsey)

The organizers behind a new non-profit in Sitka are thinking about the future.

Connie Sipe, with the Greater Sitka Legacy Fund, told the Sitka Chamber of Commerce today (Wednesday 5-8-13), that the fund was designed to be a way for residents to make an enduring investment in their community.

The Greater Sitka Legacy Fund was established earlier this year under the umbrella of the Alaska Community Foundation, which manages $58-million in assets for eleven towns and cities across the state.

Sipe stressed that the ACF provided only management expertise for the fund: When the fund grew large enough to begin awarding grants, those decisions would be made by a local board.

Throughout the development of the project, steering committee members have been careful to draw a distinction between the fund and Sitka’s numerous other non-profits.

Sipe explained how the Greater Sitka Legacy Fund would complement the existing non-profit community, rather than compete with it.

What happens is that most non-profits need money now, for current things they’re doing and current operations. This is a fund to try and address the needs in Sitka — whatever they might be — a long time from now really. Ten, twenty, or thirty years from now. A lot of little community foundations have found that they start, they set goals, they get up to $2-million or $10-million over time, and then they have money to help Raven Radio — to help other non-profits — to help deal with immediate community needs. Perhaps there’s a tsunami, and a relief fund is needed. If they’ve got earnings from that year they could distribute, they could put it into that. It’s not to take the place of any other non-profit, it’s actually to build a fund for long-term giving, and to capture, especially that kind of legacy giving. Other non-profits can certainly do it, but this is also to think about the really long term. We don’t even know! As Willow (Willow Moore, executive director Brave Heart Volunteers) says, I hope Brave Heart is here for twenty years. I hope Center for Community is still here. But I don’t know if we’ll be here, or something else will be here. This is to start going for the long term future.

Sipe said that the Greater Sitka Legacy Fund — thanks to the support of the Alaska Community Foundation — would be equipped to handle all kinds of gifts, including boats and real estate, and add them to the endowment. She also said that donors to the Fund could specify where grant funding could be target, such as athletics or the arts.

The steering is hoping to raise $25,000 in each of the next two years. If those goals are reached, the Rasmuson Foundation will contribute matching funds.

Listen to Sipe’s complete presentation and view her slides.