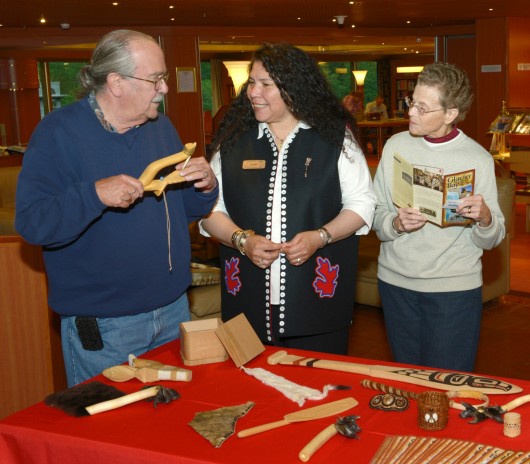 A Southeast village Native corporation wants to export its cultural tourism expertise. It’s opened a consulting business to build on more than a dozen years in the business.

Huna Totem Corporation has more than 1,300 shareholders with ties to the Tlingit village of Hoonah, about 40 miles west of Juneau.

It places cultural interpreters onboard cruise ships sailing the ancestral homeland of Glacier Bay. It also presents educational programs at the national park’s lodge, the jumping-off point for many visitors.

Now, those efforts have a different name and goals.

“Alaska Native Voices is going to be an expansion of what we are currently working on,” says Mark McKernan, who heads up what Huna Totem used to call its Interpretive Services Department.

“We’re going to now provide consulting services for other cultural interests, Native groups, small communities and what have you. We’ll provide these services to them to help them answer the big questions of how do they start, where do they start and what goals should they be aiming for,” he says.

A number of other Alaska Native corporations and tribal entities use cultural tourism to make money and employ shareholders or members. (Scroll down for links to some other cultural tours.)

But McKernan says others are looking for help.

“What we have learned and what we can pass on is just as relevant in Southeast Alaska as it would be in Costa Rica or somewhere on the East Coast or the Midwest,” he says.

McKernan says it has no formalized consulting agreements. But several groups have expressed interest and are discussing options.

“I think they have the experience. They’ve got the professional background and business experience in it. And I think they’ve done a great job in terms of trying to educate people about their culture and their history and meanwhile making a profit,” Worl says.

Huna Totem’s heritage guides are scheduled to be on about 200 cruise ships this year. That includes the Holland America Line, which sails large ships, and Alaskan Dream and Lindblad Expeditions, which operate much smaller vessels.

McKernan says cultural tourism programs need to tap traditional knowledge — and not just be another stop on the road.

“We do consult regularly with elders and others in the community and develop resources for these cultural guides to be able to grow and expand their knowledge base,” he says.

Huna Totem operates its own attraction, Icy Strait Point, which expects about 135,000 cruise passengers this year. Traditional culture is part of most of its excursions and programs.

Learn about some other Alaska Native cultural tourism programs:

Do you want your local cultural tour listed here? Email the website link to ed@coastalaska.org.