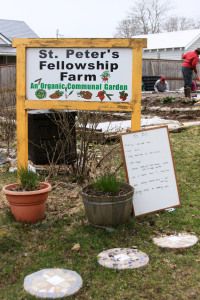 Sitka’s Community Food Survey has been extended until the end of the month, in the hope of attracting more participants.

Organizers say over 400 Sitkans have taken the survey online, or on paper at the library, but they’d like to get to 600 or more.

The goal is to understand how prepared Sitkans are to face rising food prices, or to ride out an emergency like last January’s earthquake and tsunami.

The magnitude 7.5 earthquake that rocked Southeast Alaska on January 4 did not produce coastal flooding anywhere near the scale of the Japanese tsunami the previous year.

But you have to admit, for about 45-minutes many of us wondered if this finally was the big one.

It wasn’t, but Lisa Sadleir-Hart says we should be thinking now about the next one.

“Just like you think about electricity in this town, you should also be thinking about food.”

Before the earthquake, it was primarily about the economics of the food supply. According to the University of Alaska Cooperative Extension Service’s quarterly food cost survey, food prices in Sitka rose 44-percent between 2006 and 2011.

Now, Sadleir-Hart says the task force is interested in a more three-dimensional picture of food in Sitka.

“It’s going to give us a sense of what’s going on, on multiple levels. One is: How food-secure are households? Are people struggling with these increased food prices that we’re seeing in our community? Are people out gathering and harvesting the foods that are available to us locally? Whether that’s seafood, or game, or the plants and berries that are around here. So how much food do people have on store? We had that big scare back in January, and it was an awakening to many of us that we are not fully prepared.”

Take the Sitka Food Security Survey online, or fill out a hard copy at Kettleson Library.

The survey takes about 10-minutes to complete, but Sadleir-Hart says the data collected will be the cornerstone of developing food policy in Sitka.

Some of that policy may involve warehousing more of our regular groceries above sea level. Some of it may be creating a culture of personal preparedness.

“You know, we are a tsunami-ready community. I guess I would challenge people: Are you a tsunami-ready household? Really, we’ve got to be thinking about having enough food for at least seven days. For some of us, that’s not a problem. To be able to add those extra stores and have them in storage. Folks that are living in a small apartment might not be able to accommodate that, might need to find someone with a larger household to hold on to some of that for them. We also know that there are a significant number of households that are struggling financially — they may also not be able to provide for themselves. So it’s something we need to be thinking about on a larger scale.”

Sadleir-Hart says the task force would like another few hundred Sitkans to take the survey. This November — when everyone’s mind is already on food — the task force will plan a “Food Summit” to present the data, and develop action steps.

Sadleir-Hart is a public health nutritionist, and a registered dietician, and she practices what she preaches. Her own lawn is now a garden, and what her family can’t eat she shares with others at the local farmers market.

She thinks the link between public health and food policy has been neglected too long.

“I’ve been very concerned about our food system, in the United States, the state of Alaska, and in our community. It’s become very apparent to me that we don’t have a sustainable food system.

Learn more about the Sitka Community Food Assessment on Facebook.