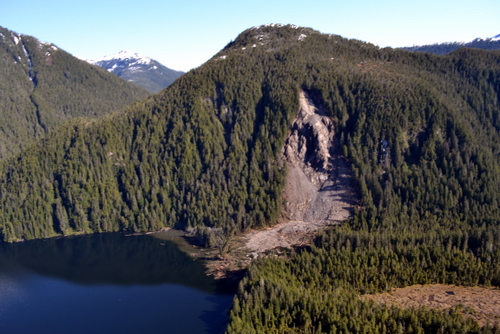 The slide at the head of Redoubt Lake, photographed in late May. The lake itself is to the left; the new lake is flooding the wooded area to the right. At present, the extent of the flooding is about 55 acres. (USFS photo)

The massive avalanche piled up debris over twenty-feet thick across the the lake’s inlet stream, completely destroying a nearby recreational cabin whose occupants escaped in the nick of time.

A watershed team recently surveyed the area and concluded that the lake’s sockeye run was likely unaffected — and may even be improved. They’re expecting this year’s subsistence fishery — the most popular in the Sitka area — to take place normally.

The sockeye start to return to Redoubt Lake around July 4. Subsistence dipnetters get their shot at the silvery torpedoes in the lake’s outlet stream. About a month later, the sockeye are entering Redoubt’s inlet stream — Redoubt Creek — which is now under 20 feet of mud, rock, and timber.

“It’s not really a waterfall. It’s a low enough gradient that they should be able to get up that,” says Perry Edwards, an ecosystem biologist for the Sitka Ranger District.

“It’s really not a lot different than the outlet falls to the lake that go into salt water. So there’s a short area where they’ll really have to motor to get up through there. The fisheries biologist was confident that sockeye should easily be able to get up there, to ascend to that upper lake area, and into the stream. And some of them may be able to spawn in that new lake that’s been created up there.” 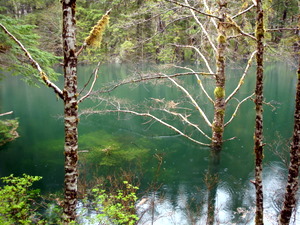 New lake? Mother Nature did more than scare the living daylights out of us when she chased Kevin Knox, Maggie Gallin, and their dog Luna down the lakeshore on May 12. She also built a dam.

During interviews following the episode, Knox reported that the stream was starting to carve a new channel through the debris field. But the stream was also slowly backing up. Perry Edwards says there’s now a fifty-five acre lake formed between the walls of the gorge. In some places it’s 35-feet deep. Over five miles of the creek upstream of the lake remain unaffected.

Edwards has no idea if the new lake is permanent.

“Only time is going to tell. There’s a lot of material that came down in that slide. Old growth trees that were three feet in diameter, the full length crossing in there like pixie sticks. It’s really going to take some energy between that and some boulders the size of Volkswagens that came down in there. It may be there for the long haul. Or large flows may come down and carve through that. We’re really not going to know until time goes by.”

The good news for fishermen is that the slide occurred at about the time sockeye salmon fry leave the stream gravels and move into the lake. The warming temperatures and snowmelt — which likely triggered the slide — also contributed to transporting salmon. The fry don’t swim downstream — they drift — and Edwards and his team think any fry that weren’t already in the lake probably made it safely over the new dam.

The Forest Service spends around $100,000 per year on the lake fertilization program at Redoubt, pouring roughly 10 tons of fertilizer — mostly nitrogen — into the lake to stimulate the growth of phytoplankton, which feed the organisms which in turn feed sockeye. The agency then monitors the return at a weir at the falls. Last year around 46,000 sockeye escaped fishermen’s nets and bears’ jaws and made it into the lake.

Edwards says all the debris being held in the dam, and in the new lake, is that much more fertilizer.

“It’s going to be really interesting with that nearly-mile of stream that’s backed up and is filled up with so much water, all those trees are drowning as we speak. If that lake pops and goes down, we’re probably going to have a lot of dead trees back there — is that bad? Not necessarily. There’s going to be a lot of nitrogen from those needles. The large wood as those trees start to fall down — starting in the first few years with smaller ones, and maybe 15-30 years with the larger ones, to help create pool habitat, and spawning habitat for those very salmon.”

Both sockeye and coho rear in lakes. Juvenile sockeye, however, remain in their lakes for a couple of years before heading into the ocean.

Little Redoubt Lake — or whatever it ends up being called — might be a boon to the fish, and to the fishermen.

“This upper lake, if it stays there, it could become very good rearing habitat for sockeye.”