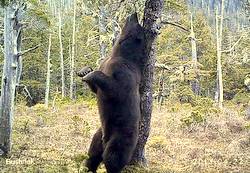 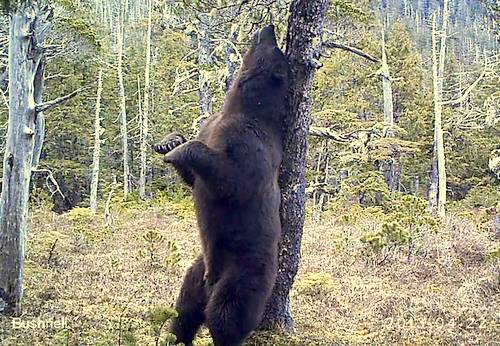 Sometimes you just have to scratch what itches. (Hugh Bevan photo)

Sitka resident and outdoorsman Hugh Bevan captured this image of a large brownie enjoying one of the delights of spring — a hearty back-scratching — with a remote trailcam. This bear was photographed in an area about 10 miles north of Sitka on April 22. It is one of four large bears the trailcam snapped over a 5-week period, suggesting an unusual density of males. Bevan says he keeps a couple of trailcams in the field at any given time. He pulled this one out on May 28 “because I was getting jumpy about going in there to check it.” For scale, Bevan (at around 6-feet) says his head would come up to the bottom of this bear’s neck.

Check out another of Hugh Bevan’s trailcam images.