Should Sitka be a mecca for electric cars? 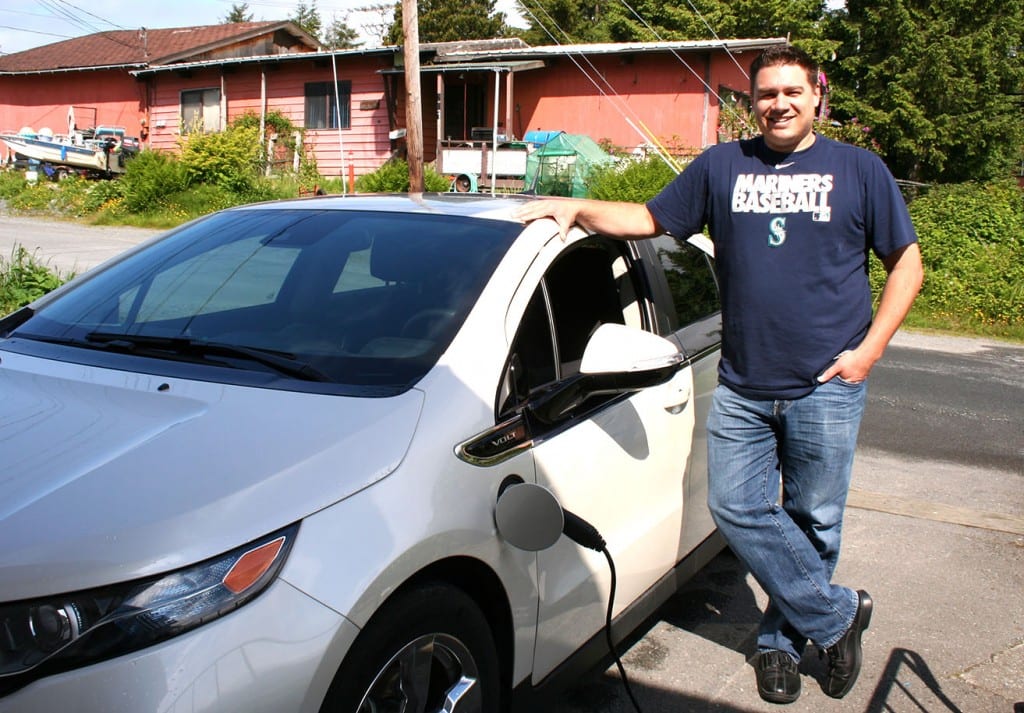 It was just a few years ago that Sitka’s electric utility predicted a significant increase in the number of electric vehicles on the road, especially in places with inexpensive electric power. But Sitka’s interest in electric cars has remained flat.

KCAW’s Erik Neumann recently visited an electric car owner in Sitka to find out why the cars have been slow to catch on.

Like most Alaskans, Sitkan’s love their cars and trucks. In fact, there’s one registered vehicle for every man, woman, and child who lives here. Sitkans use their vehicles to haul stuff and haul themselves through the wet Southeast Alaska weather. There’s one kind of car that seems perfect for most of these jobs, but hasn’t been embraced here.

Between the Nissan Leaf, the Chevy Volt and the Toyota Rav4 EV, most of the big car makers have at least one electric vehicle on the road today.

Sitka should be ideal: It doesn’t get too cold, there’s not much road, and compared to some places in Alaska, the local hydroelectric power is practically free. All of this, plus the town’s progressive attitude make it a perfect habitat for electric cars.

So why haven’t they taken off here?

Sitka resident Michael Mahoney owns the only highway-speed electric car in town. He teaches environmental science at Mt. Edgecumbe High School and in 2012 he bought a Chevy Volt.

“I don’t know why there aren’t 50 of these things driving around Sitka; or a hundred,” Mahoney said.

For Mahoney, the biggest reason to own his car is not having to buy gas. The Volt has a small gasoline engine to charge the batteries which extend its range. But it uses takes very little gas in Sitka to supplement the Volt.

“We’ve literally used 22.1 gallons of gasoline since August of last year. And we don’t plan on using any gas this summer,” he said. “It makes me feel good that when I go to the gas station, I get to say ‘see you next year.’”

With the Blue Lake and Green Lake power plants, electricity in Sitka costs less than the national average – a base rate around $.11 per kilowatt hour, compared to a national average of over $.12. For most of the year, Sitka gets 100% of its electricity from two hydroelectric plants. In most of America, if you had an electric car, that electricity would be coming from coal, oil, or natural gas, so Sitka’s power source is especially green.

Mahoney says it costs him about $15 a month to power his car. So again, if his experience is so good, why aren’t there more of these things around?

“There are several different motivations that will lead people to buy a plug-in vehicle,” said John Voelcker, the Editor of GreenCarReports.com, a website that reviews electric vehicles. He says these motivations come from things like state policies and price.

“I’m not aware that Alaska is particularly in the forefront of setting automotive trends,” Voelcker said. “In California you buy an electric car and you get a $2,500 check from the state. I’m presuming Alaska does not have those.”

On top of not having incentives like some other states, electric cars cost about $10,000 more than other new cars. And while people like Michael Mahoney say they’ll make that money back because they’re not buying any gas, it’s an expensive sticker price.

Voelcker says there are a few other reasons that might apply to Sitka: because of the way batteries work, electric cars will to go shorter distances in cold weather and they tend to be smaller, so they’re not as good for hauling boats.

But with all these reasons, he says, maybe the biggest one is that people aren’t buying electric cars because, they just don’t see anyone else driving them here to show that it works.

“Like most early technologies, you need the evangelists and you need someone who sort of gets it and says, ‘you know what, we’re gonna have to do some work here to make this happen, but let’s look at what other places have done,’” Voelcker said.

“People have a lot of misconceptions about it. They think it’s a slow car, that it only goes 35 miles an hour and the Chevy Volt will go 100,” said Mahoney. “My wife wouldn’t let me get a vanity plate, but I wanted to get a LOW-CO2 vanity plate because. We try, we’re not perfect, but we try.”