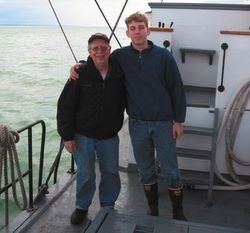 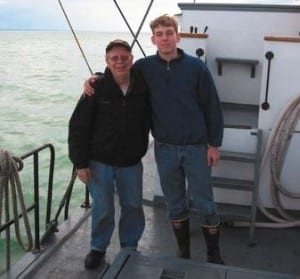 82-year-old Charles “Chuck” Baker, left, died Tuesday after an ammonia leak aboard his vessel in Sitka the day before. Baker’s wife, Reona, credits their grandson Steven, pictured at right, with helping get others away from the ammonia and preventing further injury. (Photo provided)

A man injured during an ammonia leak aboard a fishing vessel in Sitka has died.

Charles “Chuck” Baker, of Auburn, Wash., was aboard the Eigil B.

The tender vessel was tied up at Sitka Sound Seafoods at the time of the incident, around 11:15 a.m. Monday.

Baker was 82 years old when he died on Tuesday. He was a 60-year veteran of the fishing industry in Alaska, and co-owned the Eigil B with his son, Mike.

Reona Baker is his wife.

“We met in 1957 on a blind date,” she said Thursday. And for as long as Reona Baker had known her husband, he was around the sea.

“He started out with boats in Sea Scouts when he was a teenager,” she said. “Then he went into the Navy after high school and then right to work on a cannery tender after he got out of the Navy. I don’t know whether it was a built-in love of boats, but that’s what he loved doing…. That’s really the only comfort we can take in this whole thing, was that he was where he loved to be and doing what he loved to do.”

The 86-foot Eigil B was tied up at Sitka Sound Seafoods on Monday when the leak occurred.

Cheyenne Sanchez, with the spill-response arm of the Alaska Department of Environmental Conservation, says the vessel released upwards of 50 pounds of anhydrous ammonia. The chemical is used in refrigeration systems.

The spill was quickly contained Monday, although workers were evacuated from the area, and a street was closed for about an hour.

No one besides Baker was seriously injured in the accident, although three or four people reported to area hospitals complaining of ammonia-exposure symptoms. Those symptoms include burning of the eyes, nose and throat.

At the time of the accident, Chuck Baker was on board the vessel with his son Mike and his 20-year-old grandson, Steven.

“To us, Steven is a hero,” Reona Baker said. “Our grandson tried very hard to save his grandfather, but he did save his father. If our grandson had not been there with a mask on there might have been more than one tragic ending.”