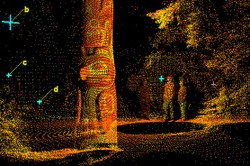 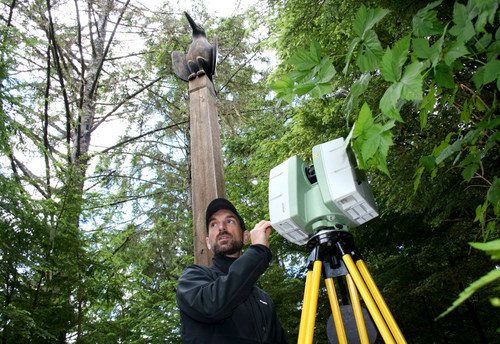 While the totem pole is one of the most recognizable forms of outdoor art in Alaska, it’s also one of the least permanent. At Sitka National Historical Park, many of the original totems have been re-carved, which, until recently, has been the only way to preserve this art form.

Now, museum professionals are starting to use computer technology to make digital copies of totems. The virtual carvings won’t ever stand silently beside a forested trail, obviously, but they will also never deteriorate. KCAW’s Erik Neumann met with National Park Service architects over the weekend as they scanned one of Sitka’s important totems.

“I’m an architect with the National Parks Service out of Washington DC. I work for a program called Heritage Documentation Programs,” said Mark Schara. He works at the Library of Congress.

Schara and his team visited Sitka from Washington, D.C. They were here as part of a program to document the totem poles in Sitka National Historical Park. But the tools used for this project were very different from the chisels and adzes used to carve the totems in the first place.

“We’re doing mostly what’s called 3D laser scanning,” he said, “which shoots a laser at the object. In fact it shoots about 50,000 points a second.”

The scanner Schara is talking about is a device that will create 3-dimensional images of the totem poles for the park’s visitor center and website. When they’re done, they’ll have incredibly accurate pictures of the totems for future maintenance by the park and for the Library of Congress, which will get a set of architectural drawings for their permanent collection.

Schara says he was sent to Alaska because these totems are unique.

“Actually I work out of Washington, but I work in National Parks all across the country and I think this is a unique resource. From my personal experience an amazing place and the totem poles are simply amazing objects, so I’m sure the Library of Congress is going to be really excited to have this as part of the record.”

To scan all the way up the totem poles, Schara stands on a mechanical lift that raises him and the camera up in the air. The camera is mounted on a tripod and is about the size of a mailbox. As it slowly spins around it records literally millions of points of information in what Schara calls a point cloud. Then, he takes a series of panoramic photographs that are layered on top and get plotted on those points.

The end result: something like a Google Map version of the totem poles.

They’re still experimenting with exactly what it’ll look like, but he describes a “fly-through” where viewers will be able to see all the parts of the carving up close. But he says, the technology is still new and for this project they’re using it in a different way.

“I’m not aware of anything specifically like this. Traditionally we do buildings, but the totems are so sculptural, they’re hard to capture in traditional drawings and it’s only with the advent of this new technology that we’ve been able to capture objects like this.”

“I’ll be honest; this project is a little bit experimental for us too.”

Over the weekend, Schara and his team documented 11 of the 19 totem poles in the park. They’ll be back next weekend to finish the remaining eight. The visitor center hopes to have interpretation from this project available in the fall.

More information on the digital preservation can be found on the Sitka National Historical Park website.