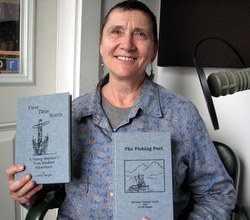 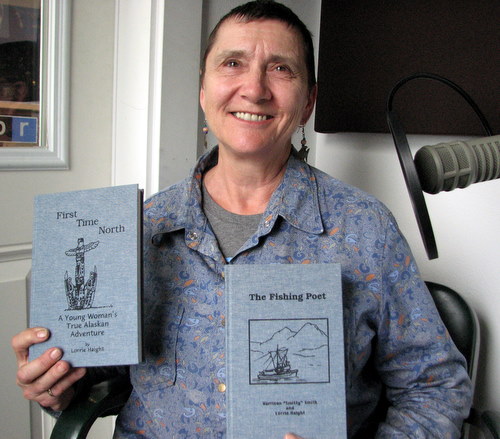 Author Lorrie Haight with handbound copies of her memoir and a collection of the late Harrison “Smitty” Smith’s poetry. (KCAW photo/Robert Woolsey)

An iconic Sitka figure is returning to town this summer — in book form. Author Lorrie Haight has collected the poetry of her late husband and longtime Sitka fisherman Harrison “Smitty” Smith in a volume called “The Fishing Poet.”

“I very seldom let the emotion of fear enter into my life. I’m curious. I’m excited about things. With the possibility of meeting a lot of interesting people, and the promise of making some money, it’s what I needed to do. It changed my life completely, one-hundred percent.”

That was how Lorrie Haight felt in 1974, on a break from her job working for Blue Cross, as she walked the docks of the Fisherman’s Terminal in Seattle looking to sign on as a deckhand aboard an Alaska-bound troller.

Two years later, she was the skipper of her own boat, fishing part-time out of Juneau.

Her life with Harrison Smith began in 1979, when her career as a professional deckhand aboard yet another boat came to an unexpected end during the middle of the fishing season.

“And I wasn’t getting along with the captain and there were no fish, so he dropped me off in Pelican, firing me. And Smitty had a lady fishing with him who wasn’t strong enough to cut the heads off the fish — he was freezing them at sea — so he was firing her.”

Haight signed on aboard the Sea Miner with Smith, and they remained partners for the next 32 years.

Haight has recorded her early experiences in fishing in a new memoir, “First Time North: A Young Woman’s True Alaskan Adventure,” which she self-published. She also stitched and bound each copy of the book by hand.

Haight is no newcomer to the world of self-published books. She’s published three previous volumes of Smith’s memoirs. She’s also just released a collection of his poetry, called “The Fishing Poet.”

“It’s divided into a couple of different parts: The back, or the dark side, and the belly, the light side. So some are very light and fun, and some are dark and controversial. He didn’t hold back.”

Smith was prolific, and an admirer of the work of Robert Service. As some of that great poet’s words are commemorated in Sitka in front of the Pioneer Home, so are Smith’s. Here’s Haight reading an excerpt of his “Mt. Fairweather,” which is mounted on a bronze plaque in Thomsen Harbor.

Here’s what it’s like on the Fairweather Grounds
When the air is crisp and clear.
Fishing forty miles offshore and the foothills disappear
Beneath the ocean’s surface, and all that’s left to show,
Is a mountain range, clean and white, solid ice and snow.
Knife-edge drifts and shadowed crags, the highest peak of all
Is mighty Mt. Fairweather, fifteen-thousand-plus feet tall.
It’s looking o’er me in silence, yet it seems to say
This is the place where you belong, and this is where you’ll stay.

Haight and Smith fished out of Sitka until 1985 — the last year in a 53-foot steel ketch called the Akvavit which they had built. After retiring from fishing, they sailed the Akvavit for several years in the South Pacific.

Smith died eight months ago. Haight says the current owner of the Akvavit will meet her here in Sitka to take some of his ashes to the Fairweather Grounds.

Haight knows that other stories are being written every day on the fishing grounds in Southeast Alaska. She hopes other take advantage of changes in the publishing trade to contribute to the record of their times.

“Everyone has a story, and it’s not that hard to self-publish your work, especially when you can put it all on Kindle Books. Write ‘em down.”