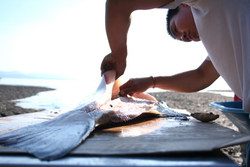 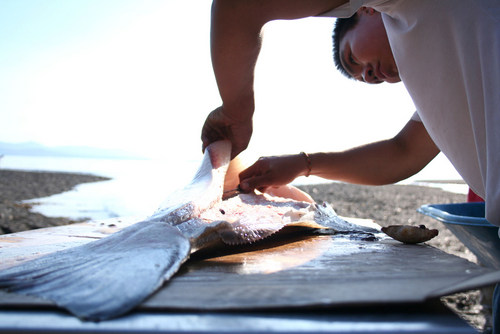 The Organized Village of Kake is a small tribal community on the northwest side of Kupreanof Island. Like many villages this time of year, they just hosted a culture camp, a week of teaching Native youth about traditional food gathering and processing. But during this week of hunting, smoking, and canning, they’re also addressing a big health issue: suicide.

“My name is Kha.oosh, that’s my Tlingit name. My Haida name is iljuuwaas. And my IRS name is Michael Jackson.”

Mike Jackson is an imposing man who speaks slowly and thoughtfully. He doesn’t show much body language, so that you can’t really tell what he’s thinking sometimes.

Jackson was born in Kake and lived here for most of his life. In town, he’s the magistrate judge.

But on this day, he’s at a beach, helping supervise two-dozen middle and high school kids at the Kake culture camp.

“Now the benefits of say, seal, the oils are good for us,” Jackson said. “Blueberries are really very good for us; as well as salmon berries and huckleberries.”

“If you want to keep me talking, here are beach greens. You can eat that right here.”

Jackson helped found the camp 25 years ago. During their week-long stay, kids learn how to make devil’s club tea and to dress seal and bear. During the time I was there, I ate dog salmon eggs and seaweed and smoked hooligan – little fish where you eat everything, from head to tail.

Kake’s camp centers around food, but there’s also a larger issue.
“We led the state in suicides, the state led the nation in suicides, and where did that put us?” Jackson asked. “It put us at the top of a pyramid.”

In the 1980s, Kake had the most suicides in America, and especially with youth. That’s when Jackson and others decided to start the culture camp. Since then, many kids have gone through camp.

Friday is 17. He looks like a typical high schooler who’s into the arts: he has bleached hair and he likes theater and music. He wants to become an actor.

“Most of the times I like to act, put on some small plays,” Friday said. “Get some people, get a little theater stage going on.”

He’s one of two-dozen campers here. I asked Friday what his favorite thing is so far.

“Getting the fish, cutting them open, cleaning them out, fillet them up, put them in the smokehouse,” he said. “We’ve mainly worked on pinks, a couple of kings and halibut, coho.”

Food prices are high here and there’s significant unemployment making life difficult for many in Kake. But the real reason for the camp is to rebuild the Native culture and traditions of residents here.

“The culture camp does operate on one level, which is just, ‘Hey here’s how we smoke salmon, here’s how we gather berries and we’re going to eat these great foods for this whole week and that’s going to be healthy,’” said Martha Pearson, a health program manager with the Southeast Alaska Regional Health Consortium, SEARHC. “I think the deeper and more sustainable level is: by giving the participants a sense of pride and I keep coming back to the word resiliency.

“The residents report that there have been no suicides in the village since the culture camp began.”

I double checked with Mike Jackson and it was 22 years since the last suicide. Within a few years, Kake went from the most suicides in the country, to none. Jackson stresses that this is the main benefit of camp, among many.

“We’re trying to encourage them even more to get back to the natural foods because of the diabetes issues that’s going on throughout the US with the Native Americans; and if we can make them more aware, that’s our culture camp,” Jackson said. “But we will never sleep on any idea that we’re going away from suicide prevention.”

“Our first priority out here is suicide prevention.”

Nicky Friday is looking to the future:

“I am going to go to college in New York,” he said.

Friday says he’s not totally sure what how the lessons from culture camp will translate to life in the city, but making that transition might just be enough.

More information about the 25th anniversary of Kake’s culture camp can be seen in a short film that was made recently by Lily Herwald and Hannah Guggenheim.