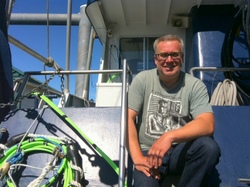 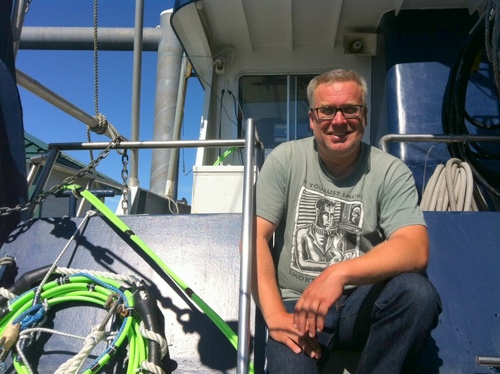 Olav Ormseth is one of the scientists working on the Gulf of Alaska Integrated Research Program. (KCAW photo by Ed Ronco)

A massive project looking at the Gulf of Alaska brings together more than 40 scientists from 11 different agencies. The idea is better understand the relationships between different species of fish and the natural world around them. It’s a method of research that signals a shift in the way we understand science.

If you’re talking to one of the scientists working on this project, they’re probably going to call it by its initials, which are pronounced GOAIERP.

“That acronym, which is a clumsy acronym, stands for Gulf of Alaska Integrated Ecosystem Research Program,” said Olav Ormseth, a scientist with the National Oceanic and Atmospheric Administration, or NOAA.

He’s standing aboard the Seaview, a Juneau-based fishing boat chartered for research cruises.

“The whole idea is that instead of having individual scientists going out and doing their own projects, and maybe at some point in the future trying to figure out how things to come together, the idea with this is that you bring everybody together and try to coordinate things from the get-go,” he said.

The team Ormseth works with is doing “near shore” studies. They happen to be looking at inlets and bays around Sitka this week. But the project itself runs throughout the Gulf of Alaska. They’re especially focused on the early stages of life for five species of fish.

“If we can get a better idea of what different factors affect their survival during their first year of life here in the inshore, then that’s ultimately going to end up providing better information to get a better model, and you can do a better job managing the fisheries,” Ormseth said.

So, remember the title of the project: the Gulf of Alaska Integrated Ecosystem Research Program. It’s the word “integrated” that we want to focus on. It means scientists are looking at the bigger picture, instead of focusing on just one species, one location, or one time period.

“It’s definitely not a brand new idea,” Ormseth said. “But I would say there’s been increasing emphasis on it, and increasing awareness of the fact that it’s important. Part of it is probably evolution. As science progresses, and as more knowledge is accumulated, things sort of tend to get better. There’s more information.”

It’s also easier than ever for scientists to communicate with each other, and compare and contrast their experiences. So, Ormseth says, by using that communication, and using the same methods to do research throughout the gulf, this project will help paint a bigger picture than has ever been painted about what’s going on off the shores of Alaska.

And that, says Wyatt Fournier, could change everything about the way we manage fish. 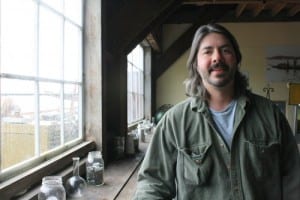 “Our goal is to eventually be able to have ecosystem-based management,” Fournier said. “It’s something that science has been pushing for for a long time, but it’s extremely difficult because of the resources required, because of the vast, vast area that is the Pacific Ocean and the Bering Sea, and because of the diversity and abundance of fish we have out here, and all the interactions that take place.”

Fournier’s role in the project is to organize logistics and research cruises. He says they’re trying to build a foundation on which future scientists can better understand how to manage fisheries. Doing so could help maintain one of the world’s most wild and sustainable sources of food. Fournier says it could also help people avoid repeating some of history’s mistakes.

Exactly what impact the project will have remains to be seen. It started in 2010, and has a budget around $17.6 million, mostly from the North Pacific Research Board.

Scientists did a lot of field research in 2011 and are doing more this year to note changes. The project continues through 2014, but understanding what it all means could take longer. Back aboard the Seaview, tied up in Sitka, Olav Ormseth says interpreting the data will be a long process.

“I kind of joke that I’m going to be able to get half my career out of this project,” Ormseth said. “The reason I say that is because I think it’s going to be … a long time before we have everything wrapped up.”

Science, he says, generates many more questions than answers. But exploring those questions builds understanding. And Ormseth says the more understanding we have, the better decisions we make.