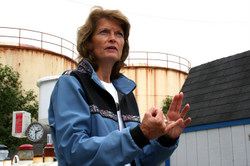 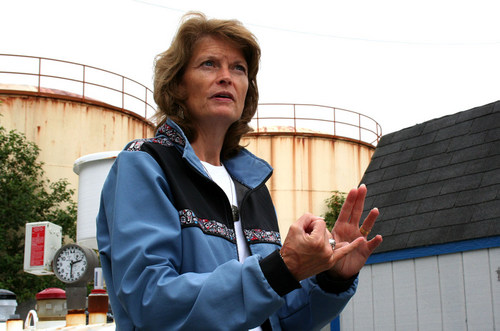 Senator Lisa Murkowski paid an unexpected visit to Sitka this morning, along with a plane full of other Juneau-bound passengers who were unable to land in the state’s foggy capital city.

KCAW caught up with Alaska’s senior senator at the ferry terminal, where she was standing in line to buy a ticket on the Fairweather for the run to Juneau.

Without any staff or entourage, Murkowski was calling the trip a “vacation,” though she plans on visiting 21 communities during the 30-day congressional recess, among them Kake and Angoon.

Murkowski is feeling upbeat for co-sponsoring two energy bills which were passed by Congress in an otherwise deadlocked session. The Hydropower Regulatory Efficiency Act and the Marine and Hydroelectric Renewable Energy Act should lower barriers to the development of smaller, alternative hydro projects.

Murkowski was excited about the opportunity to travel for a couple of days with US Forest Service Chief Tom Tidwell during her visit to Southeast. She’ll also be touring farther north with Coast Guard Commandant Robert J. Papp.

Murkowski considers herself a major supporter of the Coast Guard, but she did not hide her disappointment over the fate of former Sitka Air Station pilot Lt. Lance Leone, who earlier this spring was removed from the Coast Guard promotion list by order of Homeland Security Secretary Janet Napolitano.

Leone was the co-pilot of a Coast Guard helicopter which crashed in July 2010, killing his three crewmates. Although he was cleared in an official investigation of the accident, Leone’s removal from the promotion list effectively ends his Coast Guard career. Murkowski says the Coast Guard command “gave up on him.”