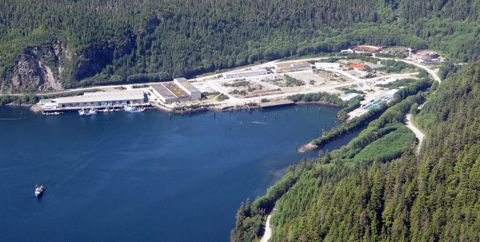 The City of Sitka won the latest round in a fight over whether voters can approve property sales at Sawmill Cove Industrial Park.

Sitka Superior Court Judge David George ruled on Thursday against supporters of a ballot initiative that would give citizens a vote on large land sales and leases.

It is the latest development in a years-long saga that’s seen the case go all the way to the Alaska Supreme Court and back.

The Sawmill Cove Industrial Park is a huge chunk of land that used to be the site of a pulp mill. Now, the city sells and leases parcels inside the park to companies that want the space. The area is intended to attract business to Sitka, and sales and leases inside the park don’t have to follow the rules that apply to other city land.

Since 2008, Jeff Farvour and Mike Litman have been trying to change that. They wanted to give voters final approval of large pieces of land sold or leased at the site. A vote would be required for sales worth more than $500,000, and leases worth more than $750,000.

But the city refused to give their initiative a green light, and kept it off the ballot. Farvour and Litman sued, and the case made its way up to the Supreme Court, which last year sent it back to Sitka Superior Court for another look.

And that brings us to Thursday.

“It’s a little disappointing to see a judge lurch off and make a decision that I think is inconsistent with the earlier Supreme Court directives in this very case,” said Juneau attorney Joe Geldhof, who represents Farvour and Litman. “It really goes to the heart of whether or not the citizens are going to have any say, or whether they’re going to allow bureaucrats and lawyers for municipal government to say ‘Sit down, be quiet. We’re the experts. We’re going to determine how we rule our communities.’”

Geldhof says he doesn’t understand why the city fought so hard against giving voters a choice.

Michael Gatti, an Anchorage attorney who represented the city in the case, says there’s a reason.

“The community elects representatives to represent it on certain matters,” Gatti said. “And while certainly people have the ability to initiate or refer matters to the ballot, they also are limited in that regard with respect to some of the principles, particularly if something is related to an appropriation or an administrative matter.”

Basically, Judge George ruled that the initiative violates Alaska law in two ways: One, it makes an appropriation by giving voters the power to steer money away from the park. The law holds that only legislative bodies, like a city Assembly, can make appropriations. And two, it steps on the city’s administrative power. Initiatives can make law, but they can’t tell a government how to run day-to-day business.

“We’re pleased with the decision and we think that it’s supported by appropriate legal analysis and authority,” Gatti said.

Geldhof, obviously, disagrees. He says his clients had lots of support for their initiative when they circulated petitions back in 2008, and that city officials should not have fought the initiative his clients wanted on the ballot.

“Six years into this, I have basically had it with small-minded people trying to squelch what’s really a straightforward initiative proposition,” Geldhof said. “You know, at a certain point, people like Jeff and Mike, they just get worn out. That old adage about ‘You can’t fight city hall,’ comes to mind here. City Hall and a lawyer that’s just bent on obstruction, they seem to win all the time, and that’s bad news for democracy on a local level throughout Alaska.”

Sitka has a new city attorney and a new Assembly since the lawsuit was initially filed. Still, the current Assembly voted to continue fighting the case.

Geldhof says his clients are still considering whether to appeal Thursday’s decision.

Update: What about existing law?

The city’s argument was that the power Farvour and Litman wanted to give to the citizens is considered an appropriation, which only the Assembly can make. The court agreed.

But city code already gives citizens that power, everywhere except the industrial park. So, what happens to that law?

The short answer is: nobody knows. Not yet, anyway.

George’s ruling says doing so, at least in the context of the industrial park, constitutes an “impermissible appropriation,” that it allows citizens to do something reserved for the Assembly.

Whether to change the existing law will be up to the seven member Assembly, which has tried to do it once before.

In September 2012, Mike Reif and then-Assembly member Bill Paden introduced a measure that would let voters advise the Assembly, but not have complete power to approve or deny a sale or lease.

The Assembly voted to put the question off indefinitely, pending review by outside counsel. It was never taken up again.

Reif said Wednesday that he was still weighing his options and considering the matter after Thursday’s decision.

In any event, the Farvour/Litman case is far from settled. There’s still the chance of an appeal on both sides. Farvour and Litman could appeal the overall ruling, and the city could even file an appeal against some of the individual points it lost.

Even though Judge George came down in favor of the city overall, he said two of the city’s arguments were too broad and, therefore, invalid.