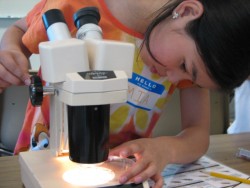 How do you teach kids about the connection between macroinvertebrates and watershed health — and make a lasting impression? Enlist a passionate marine ecologist to bring in real bugs, and give students the tools to study real science.
Listen to iFriendly audio

4 large buckets, 2 pairs of waders, a collection of nets of various shapes and lengths, and one doctorate in marine biology – this was the equipment used to craft the latest lesson plan for a 4th grade class at Keet Gooshi Heen elementary school.

Tania: I think they’re scuds and they’re kind of green!

At Thimbleberry Lake, I joined Tania Spurkland, a marine biologist for the Seldovia village tribe, and this month’s guest scientist participating in Sitka Sound Science Center’s Scientist in the Schools Program. Tania is on the hunt for macro invertebrates – specimens for a lesson on understanding watershed health.

Tania: OK just to show you something so you don’t think we’re crazy, which we are, but, let’s see where you are baby? See right there?
Emily: Yeah
Tania: That’s a may fly.
Emily: That little floating shrimp like thing?
Tania: Well it looks more like an insect it has a head a thorax and an abdomen it has three little tails. So, anyway.

After 30 years as a high school teacher, teaching is part of Tania’s DNA. It wasn’t until the end of her teaching career that she went back to get a PhD, focusing her dissertation on marine ecology.

At all times Tania looks as if she’s smiling into the sun. Likely, from years of practice – and making her passion a career.

“I always loved being outdoors and learning about everything that was around me so I always knew I wanted to be a biologist. But my dad wanted me to go into business, says Tania.”

It’s hard to picture Tania in a business suit, when waders suit her so well. And Tania makes a strong case for getting elementary school students interested in science.

“The 4th graders are our next generation and if we can have them develop and understand and a stewardship and appreciation for all the natural world around them then they will be the ones that will influence their friends and their neighbors not to over pollute, not to use too many resources.”

Tania: So I need some help here. Justin and Mia could you look and read what the temperature of the water is there…

Tania says, “You get the students involved and engaged in doing what the scientists are doing. They love to do hands on things and in Alaska we are so fortunate because we have a fantastic laboratory outside every one of our doorsteps and all we have to do is step outside and look around us and start asking questions.”

And what does a crowd of 9 year olds, prodding with pipets, swirling petri dishes, and gazing under the microscopes sound like?

Kids: Ohhh look that one! That thing is moving in there. Oh my gosh he’s huge! I can see the spots on him that’s so cool!

Tania’s visit may have inspired at least one future scientist. At the very least, it’s evident that bugs are cool at any age.