With new standards, Sitka to keep focus on students 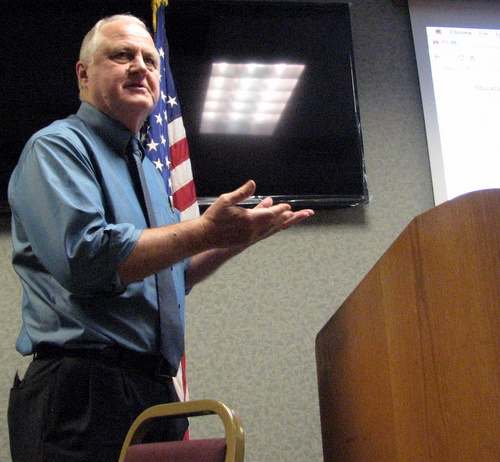 The Sitka School District is bracing for changes in the way its teaching staff and academic performance are assessed.

Superintendent Steve Bradshaw and assistant superintendent Mary Wegner outlined some of the programs and objectives of the district in a presentation to the Sitka Chamber of Commerce on Wednesday (10-30-13).

Grant-funded programs are contributing tens of thousands of dollars to district resources this year. Wegner demonstrated how to find a complete list on the district’s website. The programs range from “Digital Safety Training” to a new pre-school emphasizing cultural education.

But Superintendent Bradshaw used most of his time to caution the public about changes coming in school evaluation, which became necessary when the state of Alaska opted to leave the federal “No Child Left Behind” assessment program.

Bradshaw said that not all of the changes — which are being crafted by the state Department of Education — may prove to be beneficial.

“The big risk we have at this point, when we roll this thing out, is that 20-percent of a teacher’s evaluation will be based on assessments. We can define assessment, but part of that assessment has to be the summative tests that the kids take every year.”

The district is developing a new English Language Arts curriculum to help students meet the new standards. And Wegner added that how students will be tested on those standards will also change.

“Students will, beginning next year, be tested in an online environment. Right now, this school year, school districts across Alaska are looking at their technology readiness. And we just last week got back our results and we are acceptable in our infrastructure, but they did note that we are going to need more bandwidth.”

Bradshaw stressed that meeting new standards — even though they are the state’s — will still take significant time and energy, and he was concerned that district educators not be pulled from their main task: to have a caring adult teacher support every child.

Bradshaw will step down next June after 13 years as superintendent. His remarks, at times, sounded like a swan song.

“Well I definitely think schools are about socialization to a great extent, and about helping kids fit into society. But I don’t think that’s the school’s main purpose. Schools are supposed to be there for helping kids understand that they’re capable of far more than they may have thought. I think schools are there to raise citizens who can think on their own. And unfortunately everything I’ve seen in the last ten years takes us away from that.”

Bradshaw, as he has in the past, attributed many of the perceived failings of the public schools to economics, and cited a report claiming 50-percent of public school students lived below the poverty line.

He feared that the continued focus on standards was masking a systemic problem. “When we start looking more at data than at the individual child,” he said, “we have a problem.”

Sitka representative Jonathan Kreiss-Tomkins was in the Chamber audience on Wednesday. He said an alternative to standards-based assessment had not been proposed in the legislature — and wasn’t necessarily going to be.

“For the most part state education assessement is done by the department (of Education). And legislators don’t get into that — at least legislators haven’t in the past. So the new teacher evaluation system we have right now was created and adopted by the department. If the legislature wanted to step in and say, No, you’re doing that wrong, there’s a better idea — the legislature could. But there hasn’t been that kind of advocacy, and I haven’t heard anything about that happening in the future.”

What is in the legislature’s power, however, is funding. Kreiss-Tomkins made it clear that he opposed efforts in state government to introduce vouchers, or otherwise direct public funding to private schools.

He argued for the opposite.

“To me the real solution with schools and trying to improve schools, is to improve the inputs and the resources they have. Make teaching a Cadillac profession, so every valedictorian and saluditarian coming out of high school in Alaska wants to be a teacher, and have absolutely the best and brightest, the most dynamic students and young people go into the profession. As Steve said, if you have caring people in front of kids, its how lives are changed education is bettered. I think if Alaska can do that, we can in a meaningful way improve education and schools in Alaska.”

The school district presentation to the Sitka Chamber included some upbeat news: the steady decline in enrollment in recent years appears to have bottomed out. Superintendent Bradshaw reported that the district had just completed it’s official student count, and enrollment stands at 1,334 students — almost 40 more than budgeted for. State funding to the Sitka District will be adjusted accordingly.