The Sitka School Board on Monday night adopted a new English Language Arts curriculum for the district, beginning next school year.

The so-called ELA is designed to prepare students to meet new standards developed by the state Department of Education. Alaska’s standards are closely aligned with national standards adopted by 45 other states, and usually referred to as “Common Core.”

The unanimous vote followed an hour-long work session with the faculty committee who made the formal recommendation. 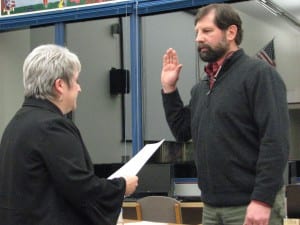 There was no opposition from the public, despite the fact that Common Core standards have generated national controversy. Critics have suggested that the new standards mask deeper problems in education reform, and that prescribing what students should know does not necessarily mean that they’ll learn it.

In a follow-up interview with KCAW, Pacific High teacher Hillary Seeland said that she had already been using the Common Core Curriculum in her classroom for the last couple of years, and that it was “amazing.” She added, “It’s all about building skills, and building levels of thinking — and not about the content you’re using.”

Seeland said that the Common Core has increased her prep workload somewhat, and caused her to think about more intentional teaching. She said it’s more transparent than the all-knowing teacher of past models. “I talk to my students about learning targets, and they have been rising to the challenge.”

Sitka High’s Stefanie Ask teaches in a more conventional classroom. Again, in a follow-up with KCAW, she said that the Common Core standards reflect much of what she’s doing already. She added that, when you looked at Common Core and Alaska’s standards side-by-side, they are “95-percent the same.”

The board’s vote to adopt the Common Core English Language Arts curriculum mirrors a decision it made at the end of last year to adopt Common Core math standards.

Superintendent Steve Bradshaw cautioned that adopting new standards could be costly, as the district acquired new materials — costs in the hundreds of thousands of dollars. Board president Lon Garrison recommended that the district add the expense to its list of legislative priorities, since the state is dirving the push to new standards.