Widmark can’t walk away from the Tribal Council 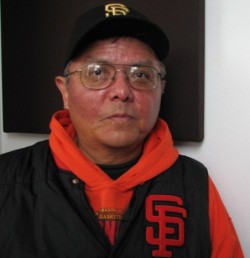 Lawrence”Woody” Widmark is one of six candidates for STA Tribal Council. (photo by KCAW’s Emily Forman)

Lawrence “Woody” Widmark is one of six candidates for Sitka Tribe of Alaska Tribal Council. He is running for re-election and has a long history serving on the Tribal Council, but he says it was never really his choice.

EF: I can see that you’re a sports fan.

LW: Got my true colors. I’d at least say I wear Halloween colors all of the time.

He is covered from head to waste in San Francisco Giants colors and logos. So, it’s no surprise that he’s been the sports coordinator for the Sitka School District for the past 25 years. What isn’t as clear is why he is running for Sitka Tribe of Alaska Tribal Council.

That’s because last November, Widmark said he was done serving on the council. For good.

“People were flabbergasted that after 24 years of service that I was done. They would stop me on the street and say are you done? Are you kidding me? I says yeah, I’m done, ” says Widmark.

Two weeks later he was back on the council. He was asked to serve one year left in a two year seat. Now, that he’s finished out the term, he’s finally off the hook. He can move on. But instead, Widmark is putting his name in for another two years.

Widmark says, “I almost didn’t run. I had like two hours to go. Someone came to me and drove me down, signed me up.”

So, I had the challenge of finding out why after 20 reluctant years as tribal chair, and four on the council, Widmark can’t seem to walk away.

“Grandfather and father were pretty involved with Alaska Native Brotherhood – camp one down the street here, and I grew up under politics so to speak. That was enough for me, ” says Widmark.

Having grown up with it, Widmark had no interest in politics. But, the tribal community insisted that he run.

EF: What do you think they saw in you?

But, Widmark’s reluctance to run does not mean he’s apathetic about tribal issues.

He says, “And as a chair, or the position of the chair or a council is a privilege.”

When reflecting on the decades he’s served, he’s most proud of the collaboration between the Sitka Tribe of Alaska and the City of Sitka.

“It’s basically having two governments working together, and that’s unheard of in this state.”

Widmark says he played a role in getting the original memorandum signed that led the Tribe and the City to recognize each other as governing entities in Sitka.

This moment stands out because he felt it sent a message to the state and local lawmakers that this type of collaboration can work.

Widmark is also proud that Sitka kept its rural status during his time as tribal chairman – a step Widmark does not take credit for but, for the sake of the community, was thankful to witness.

He says, “and I was pretty proud of that moment too, having you know the chair of the tribe and the city hand-in-hand if you will to keep Sitka rural. People like to fish, people like to hunt, people like to harvest. These are important things that this community does.”

When I ask him what he might like to accomplish if he were re-elected he says he just wants to see the Tribe keep doing what it’s been doing. That is to remain sovereign but continue to collaborate with the city.

Lawrence Widmark is on the ballot with Stephanie Edenshaw, Thomas Gamble, Louise Brady, and Ben Miyasato. Harvey Kitka is the 6th Tribal Council candidate, running as a write-in. Visit the Sheet’ka Kwaan Naa Kahidi Community House between now and Election Day on November 12 to cast your vote.