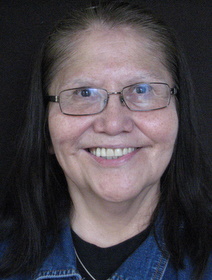 Stephanie Edenshaw is one of six candidates for Sitka Tribe of Alaska Tribal Council. She’s previously served two years on the council, and would like to see the Tribe tackle some major health issues.

Edenshaw is on the ballot with Louise Brady, Thomas Gamble, Lawrence “Woody” Widmark, and Ben Miyasato. Harvey Kitka is running as a write-in candidate.

Stephanie Edenshaw was born and raised in Sitka, but she has spent much of her adult life coming and going.

“I always cried when I left,” she says.

She returned most recently in 2010, after 15 years in Anchorage. And she noticed some changes in her hometown.

“I got back here and I didn’t realize there were so many problems with drugs here in town,” Edenshaw says. “I couldn’t believe it. I really think that alcohol and drugs should be the number one health issue here in Sitka.”

The issue is both personal and professional for Edenshaw. She works as an advocate at Sitkans Against Family Violence, and at Mary’s Place, a residential treatment program for women dealing with drug and alcohol addiction run by Sitka Counseling.

“I was born and raised here, I’ve seen it a lot,” she says.”I’m a recovering alcoholic, I have 29 years. I had a ten year history of drinking. I saw it growing up.”

Edenshaw said she’d like to see the Sitka Tribe focus on drug and alcohol abuse, perhaps by partnering with SEARHC to run outreach and treatment programs.

She previously served on the Tribal Council, for two years, and says she’s driven by a family history of political engagement. Her mother was a strong supporter of the ANB and ANS.

“I saw how she struggled,” she says. “You know, back then, there was a lot of discrimination, and I saw how strong she was and believed that things could be better if you fought for it. She was doing it for her kids. And I have grandkids, I have three kids, and I want them to know their heritage and know they can fight for what they believe in or work for what they believe in.”

Growing up, politics was a family affair.

Edenshaw’s brother Woody Widmark is also on the ballot this year. He has served on the Tribal Council for 24 years.

Edenshaw says that her top priorities on the council would be getting the Tribe’s finances in order — and improving communication between the tribe and SEARHC.

“From my point of view, SEARHC has not been transparent,” she says. “All the changes that are going on, and we as customers have not been informed about what’s been going on.”

But most of all, she’d like to foster a sense of unity on the council.