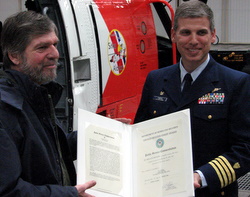 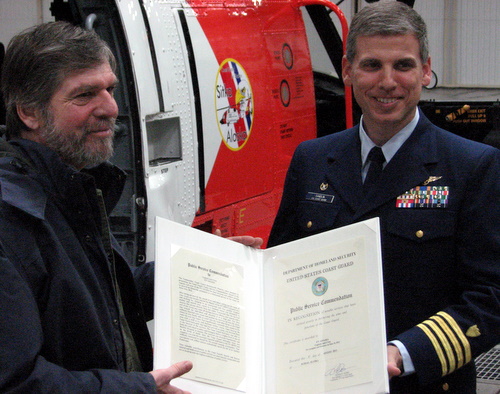 The US Coast Guard awarded one of its highest civilian honors to a Sitka fisherman whose quick thinking likely saved the life of a fellow mariner last summer.

John Hagen was presented with the Public Service Commendation in a ceremony at Air Station Sitka Thursday morning (11-7-13), as the station’s pilots and officers stood by in full dress uniform.

John Hagen’s name did not make the news last June, when he intentionally beached his troller Aspasia in Icy Strait to rescue Tim Lane, who was drifting by in a waterlogged survival suit.

The major news — sadly — was the loss of Lane’s crewman, 25-year-old Alan Young, whose body was never found despite an intensive land and sea search covering 450 square miles. Young had gone overboard from Lane’s boat, the Swift, sometime in the night.

But Lane survived, thanks largely to the efforts of Hagen, according to the Coast Guard. The commendation describes the victim’s condition as being “on the brink of death.” This is Air Station Sitka executive officer Chip Lewin reading from Hagen’s citation: 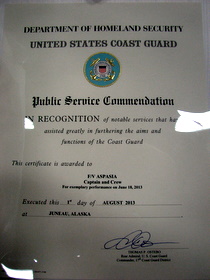 “Your courageousness, and selfless actions undoubtedly save the life of an Alaskan Fisherman. Your valuable contributions to the Coast Guard’s search and rescue mission, and your dedication to public service are most heartily commended, and are in keeping with the highest traditions of public service.” (Applause.)

Hagen and some family members were then led on tour of the Air Station’s hangar, including the Jayhawk helicopter Hagen had last seen as it hoisted Lane off the remote beach in Icy Strait.

Hagen told local media, and a camera crew from the Weather Channel’s “Coast Guard Alaska” program, that he did not consider his actions on June 18 to be extraordinary.

In telling the story, he says that it could have been anyone in shoes.

“About 3 o’clock in the morning I hear someone yelling out the (my boat’s) name. And you wake up and it feels surreal, like it’s a dream, almost. Heard it again, went out on deck, and a guy is floating by in a small dinghy. He’s sitting in it. I could tell immediately that he was in trouble and very hypothermic. I tried to get a life ring to him, but the current’s very swif there and he was gone before I could even get it unhooked. I got my granddaughter up, we pulled anchor, and caught up with him. Tried to get him on board, but his survival suit was full of water. We may have gotten him on board if we had taken it off, but it was a judgement call. I decided to leave him in his suit. We got a rope around him and towed him to the beach. And from there we were able to pull him up to the bow, get a long pole, and push him up on to the beach where he could get out on his own. It wasn’t until then that I took the time to call the Coast Guard and tried to get help. Every second seemed to be important to get this guy on the beach.”

Hagen says in retrospect he realizes that it was unusual to deliberately beach his boat, “but there really was no other option.” After the Coast Guard hoisted Lane, Hagen was able to power the steel-hulled Aspasia back into deeper water. He also towed the dinghy back to the Swift, and began to search for Lane’s missing crewman.

Hagen is also somewhat reluctant to take full credit for the rescue. He says he plans to give the commendation, which is bound in a white leather portfolio, to his granddaughter, Sabina, who capably assisted the rescue as his deckhand.