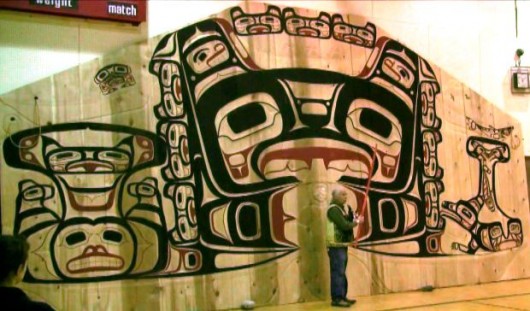 A tribal house in the former home of Southeast Alaska’s Huna Tlingits will go out to bid this winter. It’s part of an effort to restore Native traditions to what’s become a national park and preserve.

Glacier Bay was the traditional home of four Tlingit clans.

Then the ice that gives the bay its Western name started advancing. The people moved and built new villages. Hoonah, about 30 miles to the Southeast, is the largest.

She says about 5,000 years ago, the bay’s main glacier began advancing rapidly. It created an outwash plain, which became inhabitable about seven centuries ago.

Eventually, the glacier advanced enough to push them out. The ice later receded. But the bay became a national park and preserve, blocking resettlement.

Now, the park is working with Huna leaders to construct a building to recognize and commemorate their place in the bay. (Read more about plans for the house.) 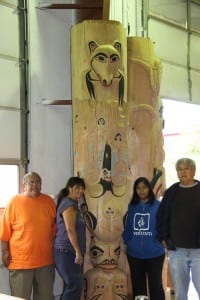 “We’re calling it a tribal house. Traditionally it would be a clan house,” says master artist Gordon Greenwald, a retired Hoonah shop and art teacher who is heading up the carving effort.

“They’re only building one and we needed to represent the four original Huna clans. We’re trying to do the best we can to represent our people in our homelands,” he says.

(Watch a video of Greenwald unveiling and explaining the house screen. Click the link here, then scroll down for the video link.)

Greenwald and Moss provided a project update during the recent Tlingit clan conference in Juneau.

Plans to build the tribal house were made in the late ‘90s. The effort has picked up speed in recent years.

Moss says the contract for the $4 million project will go out to bid this winter. Construction will start in the spring. And it should be completed in the spring or summer of 2016.

But she says some details still need to be worked out.

For example, Tlingit tradition calls for open fires in such a structure. But Moss says since it’s a federally-owned building, and that’s not allowed.

“We did see some pretty funky-looking fake logs that were first rolled by us that that we didn’t approve of. So we’re still continuing those discussions,” Moss says. 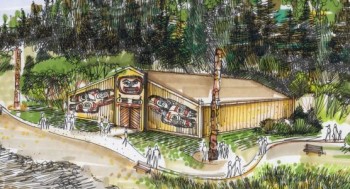 Most other parts of the design are complete.

Greenwald led the carving team creating a 16-by-30-foot inside screen depicting the history of the area and its people.

“I had many visits from ancestors through the nights. So there were many additions and deletions from this as I went along,” Greenwald says.

“And I always joked with my assistants that every now and then they would knock on my door in the middle of the night and say, ‘Young man, you thought you knew what you were doing. No, you don’t. You need to change this.’ ”

The finished cedar-plank screen has formline design images including icebergs, the glacier that forced them out of the bay, canoes and seabirds.

Four clan totems have also been completed. And work on a separate exterior screen is underway.

Before coming up with the plans, Glacier Bay park officials held community meetings.

Moss says people made it clear that the house should follow Tlingit traditions as much as possible.

“We used photographs, old published literature. And then Gordon and the other carvers working on the project and park service architects and landscape designers traveled throughout Southeast Alaska and also into British Columbia to look at other tribal houses so they could beg, borrow and steal from places that have gone before us,” Moss says.

And that’s not all.

“Throughout this process, consultation with elders was a must. I could not go forward on my own. I had to have the guidance of my elders to help me get to where they felt I needed to get,” the carver says.

The tribal house will be open to summertime visitors and be used by the Huna people year-round.