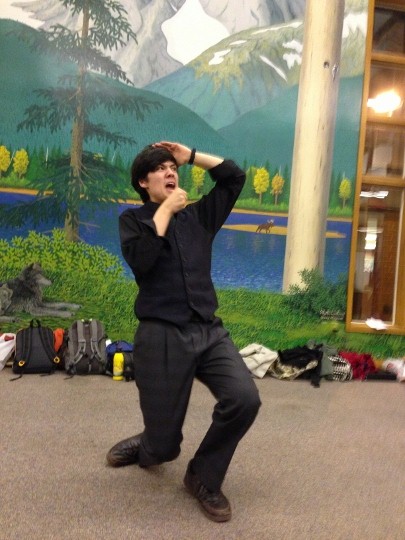 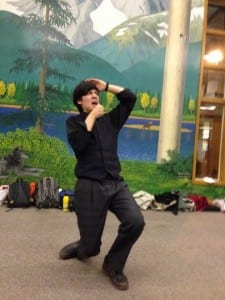 Sitka High School’s Jack Petersen performing his command performance. Scroll down to the bottom of this post to hear audio from his piece. – Photo by Shady Grove Oliver/KSTK

Sitka teams cleaned up at the third Southeast Drama, Debate and Forensics — or DDF — tournament, which was held this past weekend in Wrangell.

This meet was a chance for dozens of students from several Panhandle schools to face off in categories ranging from extemporaneous commentary to solo acting.

And it was all put together by two Wrangell seniors.

Matthew Covalt and Tyler Eagle are usually heavy-hitters in the debate category, but they tabled that personal competition for the responsibility of running the meet, as their senior project.

Eagle says it was a good, if stressful, experience.

“It was a pretty jam-packed schedule,” Eagle says. “We were hoping to actually debate this tournament. But once we actually got into scheduling everything and working with everything, we figured out that we weren’t going to be able to simply because there was so much to do.”

The events started Friday night and continued through Saturday.

The duo say they were hard up for judges throughout the tournament, which meant a lot of scrambling around to make things go smoothly for the students.

But, Eagle says, it all paid off when he and Covalt stood up to announce the finalists the last evening.

Covalt says he was impressed by some of the younger students, including two first-years from Wrangell who performed the pantomime “Doctor’s Office,” which earned them 3rd place.

“I actually really enjoyed the Freshman group that went out—Kaylauna Churchill and Kyla Teat. This is their freshman year so getting commands the first time they even go to a meet is quite impressive. So, that was my favorite.”

With three categories and 12 distinct events – you’d need a filing cabinet to hold the full results of this meet. Luckily, there aren’t too many schools in Southeast Alaska, so I’ll try for some rapidfire results that pan the panhandle.

Juneau also had a good showing in the theater categories. Megan Wright brought in a lotta laughs and first place in Humorous Interpretation. Ashleigh Watt and Becky Erickson put on some backwoods accents and scooped up first in Duet Acting.

Thunder Mountain took second place in Duo interpretation with the dynamic duo of Rebecca Hassler and Liz Kell, who also gave a command performance of their piece on the many interpretations of fairy tale, Hansel and Gretel.

Sitka High School swept a number of events. Celia Lubin and Annemarie Pike tied for first place in debate with fellow Sitkans Owen Fulton and Chaya Pike. Both teams were undefeated with 6-0 records.

Sitka’s pantomime “The Shadow” also took the top spot as did Owen Fulton in Solo Acting. Annemarie Pike also came out on top in both Dramatic Interpretation and Extemporaneous speaking.

Ketchikan’s Sam Ortiz and Cheyenne Mathews took third behind the two Sitka debate teams with a 5-1 record. It placed second, third, and fourth in expository speaking.

All in all, it was an outrageously, tremendously, mind-bogglingly stupendously, triumphant weekend for Southeast’s young orators, who head off to their next meet in December. Bravo.