Commentary: Culture can fill the void created by assimilation

The opinions expressed in commentaries on KCAW are those of the author, and not necessarily shared by the station’s staff, board, or volunteers. 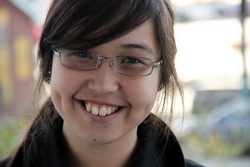 Alaska leads the nation for drinking and suicides per capita. Many have theories as to why Alaskans drink to get drunk, such as: “The Natives aren’t accustomed to it, so they get out of control.” Yet when we peruse songs, movies, history, and even the everyday household, the majority of severe drinking problems are seen as stemming from a loss, as of a loved one, as clearly sung in Brad Paisley’s Whiskey Lullaby in which the main character “put that bottle to his head and pulled the trigger in order to drink away her memory.”

The same feeling of loss creates the alcoholism epidemic in Alaskan communities. After Sheldon Jackson’s report to Congress that the Natives needed to be civilized, children as young as the age of five, who had never previously left their villages, were forcibly taken to boarding schools. One man now reaching elder status recounts:

I was eight years old and my brother was six when we were sent away to the Wrangell Institute boarding school in the fall of 1955. Boarding school taught me that everything I knew about my culture, language, and world view were evil, and must be pushed away.

My own grandparents were among the generation to face this abuse. Of the horrors that they were most willing to talk about was their inability to speak a word of their Native tongue inside or outside of the classroom, lest they face severe punishment. They came back to their village after graduation so ashamed of their culture that they never taught my parents Yup’ik, and in turn I did not learn, along with the rest of my generation. Moreover, when the boarding school generation became parents, they could only parent what they knew in their childhood days, and what they knew of was cruel violence. Many, after losing so much became alcoholic.

In modern education, we no longer punish children, nor do we actively try to purge their culture. But the void that was created not long ago still goes unaddressed. I am living proof. As I was growing up I believed whole-heartedly in the power of education. And since the system we have today does not prepare students for hunting, fishing, gathering, or conversing with an elder in their native language to gain wisdom, I do not have any of these skills. Instead, I know how to get a job. But jobs are scarce in rural areas. Therefore, any student like myself who commits herself to her school work is ultimately committing himself or hersellf to leaving their hometown, lifestyle, culture, and family. The student who partially commits to the traditional way of life, and partially to school is inadequate in both, and will usually end up in limbo, in a pit of inability to support themselves either in their homes or in the cities.

This is our void. A void powerful enough to put many people at the bottom of a bucket.

The Alaska suicide and alcohol epidemic stems from assimilation. And it’s time for change.

I attend Mt. Edgecumbe High School — the same boarding school both my grandfathers were forced to attend in their youth. Needless to say, assimilation is a great success. But in that success, a tremendous loss remains for my people and for myself. A long time ago our cultures were taken away, and in their place were left alcohol, suicide, disconnection.

The challenge for us all today is to take away such corrosions, and in their places leave culture.

Shanelle Afcan is a student at Mt. Edgecumbe High School in Sitka.