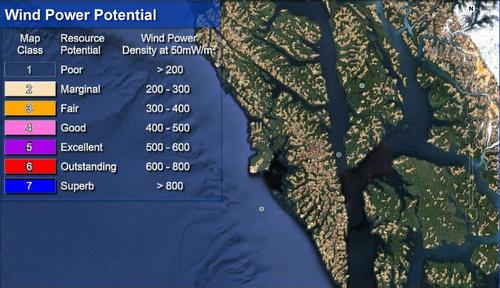 The AEA’s Wind Map for Southeast Alaska, as viewed on Google Earth. Stromberg says the AEA will map energy potential for areas not indicated on the map, if asked.

The Alaska Energy Authority’s research into the potential for utility-grade wind power in Sitka may provide an unexpected boon to residents living off the grid: The wind maps the AEA is producing could aid island dwellers in setting up residential turbines. The maps have detailed information on local winds, and are easy to find on the internet.

Rick Stromberg, from the Alaska Energy Authority, gave a presentation on Sitka’s wind potential Wednesday night (11-13-13) on behalf of the city’s electric utility. But his remarks about smaller-scale turbines powered the audience’s questions afterwards.

Stromberg said that it was perfectly reasonable for homeowners on islands to use wind to generate power.

“You would do that as a residential system with batteries and an inverter. You may have a diesel generator that that runs to charge the batteries too, or solar panels,” he said.

City Administrator Mark Gorman mentioned that he had set up a wind generator at his place on Middle Island about 15 years ago.

“It lasted, probably about six months before the first one blew off after one of our wind storms coming off the island. Put up a second one and that blew off, and that was enough.”

Stromberg agrees that too much wind in Sitka can be a problem for wind generators. That is one reason to check the Energy Authority’s wind models before building a turbine.

“Sitka is out right on the ocean as opposed to being back in some protected waters so I’m sure that there are some locations where that’s the case, If you’ve been living there a while and you know you have some really severe events, you’re getting 100 mile an hour winds, it’s probably not the place to put up a residential turbine. Again, check that model.”

Home owners who want to check the model can log on to the Alaska Energy Authority website and, using Google Earth, zoom in on their property and look at the best place to catch enough wind, but not too much.

“It only takes about 5 minutes. If you go to the Alaska Energy Authority’s Wind Program Page, there’s a link to our maps page. About 2/3 of the way down there it will say ‘Google Earth’ and there’s a link so that once you have Google Earth loaded onto your computer, just click on that link and it will download a .kml file which is what Google Earth recognizes and it will overlay the wind resource model onto the whole map of the state of Alaska so anywhere you zoom, in the entire state, you can see if you might be in a windy zone.”

Or, Stromberg says, “We’re happy to make a map of your location, help you out with that, at no cost, if you just contact the state.”

Stromberg say there are other considerations in siting your wind generator, like trees.

“Typically you want your wind turbine to be at least 25 feet above that vegetation level. So if you’re exposed to some open areas that would be great but if your’re down in the forest and your trees are 80 feet tall you’d need to go more than 100 feet on a tower and that gets pretty costly.”

So with all the problems he’s had, has Mark Gorman given up on the idea of an island wind plant?

“No, I think we should be looking at these and experimenting. Again, this was 15 years ago. The technology has been advanced. I know of other people who have been more successful. I was kind of a hobbiest at it. Maybe I did not put it in the best location or secured it properly. I think there’s opportunity there.”