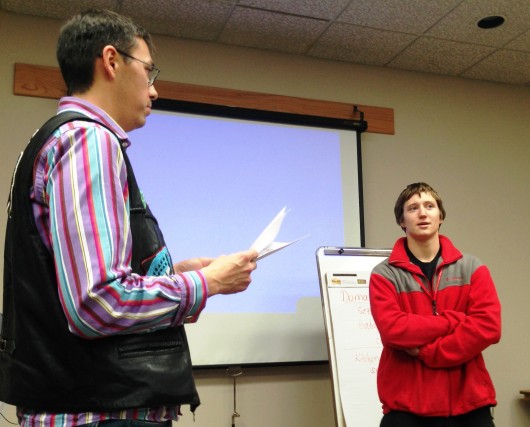 At the recent Tlingit Spelling Bee, Hans Chester gives winner Will Geiger a word. The bee was part of a games session during the November’s clan conference in Juneau.(Ed Schoenfeld/CoastAlaska News)

It’s no secret that fewer and fewer people can fluently speak Alaska Native languages. And while there’s renewed interest, it’s hard to get beyond nouns and verbs.

Southeast Alaska educators and culture bearers are using games to make learning a difficult language fun. Here’s some of what happened during a recent Sharing Our Knowledge Conference session in Juneau.

A half-dozen people stand at the front of a meeting room, ready to test their Tlingit spelling skills. 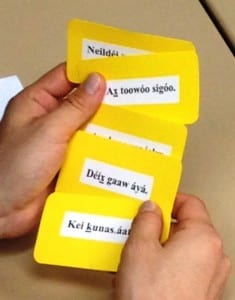 Cards with written Tlingit words are used during a language game during the clan conference.

“This is the first time we’ve ever done this as a Tlingit spelling bee,” says Linda Belarde, a culture and language expert who works for the Sealaska Heritage Institute.

She’s one of the organizers of the session, which also included math and word games.

“I really congratulate any of you who are willing to be in this spelling bee, because spelling is hard and nobody likes to make mistakes,” she tells the half-dozen contestants.

He also provided tips on identifying some of the Tlingit letters that aren’t used in English.

Then, it was time for the real competition, with harder words that stumped most contestants. One by one, they dropped out after misspelling a word. It finally got down to two people, then one.

The winner was Will Geiger, a University of Alaska-Southeast student, who had to make it through several other words to take the title.

Tlingit used to be a spoken language, with no associated writing. Missionaries and academics came up with several rough spelling systems.

The contemporary version was developed over the past half-century, through consultation with traditional speakers.

This bee was based on a Tlingit spelling book, edited by language experts Richard and Nora Dauenhauer, who have worked for and with the Sealaska Heritage Institute.

Watch a video of Cyril George Sr. counting in Tlingit and explaining the traditional number system.