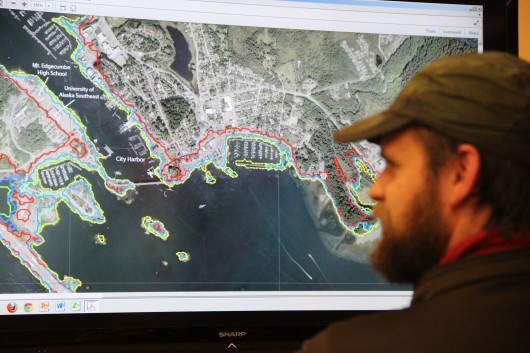 In the back of most Sitkans’ mind is this question: When the big wave comes, will my house be under water? Researchers at the Alaska Earthquake Information Center and the Division of Geological & Geophysical Surveys (DGGS) have an answer, of sorts. This month, they released a new map outlining which parts of Sitka would be affected by a major tsunami.

On January 4, 2013, just before midnight, Sitkans woke up to feel the ground shaking beneath them. Then came the tsunami siren, warning everyone to get to high ground.

Fire Chief Dave Miller is responsible for setting off the tsunami siren.

“The thing that got people excited about it was that we actually felt the quake, and we heard the siren,” Miller said. “And we hadn’t heard the siren in probably 20 years.”

In the end, there was no wave. But for many people, it was a wake-up call – what would happen if a big wave did come?

This month, researchers released a new map that tries to answer that question.  It shows the state’s best estimate for how far inland the water would reach, and how deep it would be, in a worst-case-scenario tsunami.

Miller studied a copy in his office.

“Lincoln Street seems to be the dividing line through town,” he said. “Everything on the water side would have, eh, 3-6 feet of water.”

So Centennial Hall, in downtown Sitka, is under water. Crescent Harbor is swamped.

But the good news is that most of Sitka is above the high water line.

“[At] the Fire Department – we’d be fine,” Miller said. “We’d be sitting high and dry and wouldn’t have our fishing poles out yet.”

And it’s not just the Fire Hall. Some places that seem very low – like the airport, and SeaMart supermarket– are above the inundation line. Most of Sitka’s main roadways – like Sawmill Creek Road and Halibut Point Road – are also above the high water mark, protected by steep bedrock along the coast.

Elena Suleimani is a tsunami modeler at the Alaska Earthquake Information Center, and it’s her model that the new map is based on.

“I’ve been studying tsunamis all my life,” she said.

According to Suleimani, the worst-case-scenario for Sitka – the scenario on which the map is based – would be a big earthquake on the subduction fault that stretches from Kodiak to Prince William Sound. That fault produced the Great Alaska Earthquake of 1964, the second largest quake ever recorded anywhere.

Closer to home, the Queen Charlotte Fault – which got Sitkans out of bed in January – is a strike-slip fault: the plates are sliding past each other, instead of colliding head-on, and during earthquakes, they don’t produce the kind of vertical motion that makes for big waves.

They can, however, cause landslides, both on land and on the continental shelf, under water. These landslides can cause their own waves – and it’s almost impossible to model them. That’s, in part, because they occur along smaller faults that haven’t been studied.

Rich Koehler works with the state Division of Geological and Geophysical Surveys.

“We haven’t looked at these,” he said. “Nobody has. Partially because they’re covered in – it’s rugged terrain, covered in forest, it’s hard to get to. Anyway. There’s nothing known about these faults, how often earthquakes happen, how big they could be, nothing.”

Still, Suleimani and Koehler said that the largest wave caused by a landslide would still be smaller than the worst-case-scenario plotted on the map.

So, at the end of the day, what’s the takeaway? According to Suleimani, no matter what the map says, if you feel the ground shake, go uphill:

“If you are in a coastal area and you feel the ground shaking, just get uphill immediately,” she said.”Don’t wait for any official announcement, don’t wait for sirens. Just go uphill. And stay there for 24 hours.”

Sitka Fire Chief Miller says the key point is to know ahead of time where you’re going, and be ready to head there on a moment’s notice – something many Sitkan’s weren’t prepared for in January.

“You get 9,000 people trying to move all at one time, it’s a zoo at best.” Miller said. “There’s a lot of cars, there were cars going hither and yon at any given time on the street in front of the fire hall.”

Miller thinks people should take a close look at the map. He also thinks they should take it with a grain of salt.

“The thing that you’ve got to remember is, this is a computer generated map,” Miller said “In Japan they had the same thing, they did the same studies, had the same results…and then they had the earthquake and   Mother Nature said, get ready. I’m coming!”

You can download the Sitka tsunami inundation map from the DGGS here.