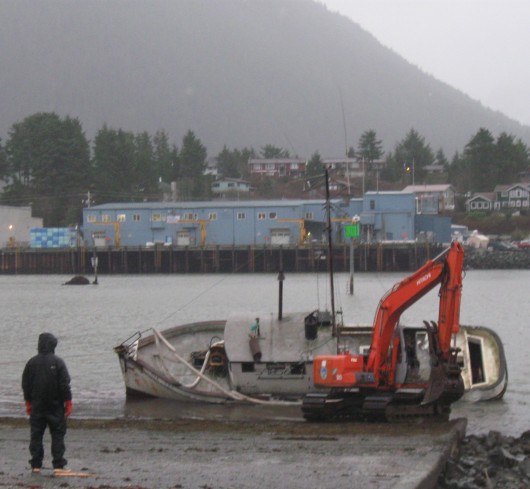 The F/V Skeeter was hauled out of the water on November 22 after sinking in Eliason Harbor earlier in the month. (Photo courtesy of Stanley Schoening)

The Coast Guard is asking local boat owners to check their vessels after a spate of sinkings this fall. The F/V Skeeter was hauled out of the water this morning (FRI 11-22-13), after it sank at its mooring in Eliason Harbor in early November. It is one of five boats that have gone down in area harbors since August, according to Chief Warrant Officer Michael Wortman of the Coast Guard’s Marine Safety Detachment.

Wortman is worried that he’s seeing a trend.

“It seems to be higher than normal,” Wortman said. “The fleet is getting older, and people leave for long periods  of time and don’t take care of the boats. And the people they’re hiring to watch the boat aren’t very well trained. So there’s things that we do need to address.”

The Coast Guard doesn’t yet know what caused the Skeeter to sink, but Wortman suspects that local boat owners are not maintaining their bilge systems, which pump water out of vessels.

“I definitely highly encourage all the owners in the area to check their bilge systems,” Wortman said. “Make sure the pumps are working properly, batteries are in good condition…because, with all the rain around here, your boat can go down pretty quickly.”

After it sank, the Skeeter was turned over to the harbormaster, who worked with the Coast Guard to tow the boat across Sitka Channel and haul it out of the water at Japonski Island for disposal.