More Sitkans turn to the Salvation Army for food assistance 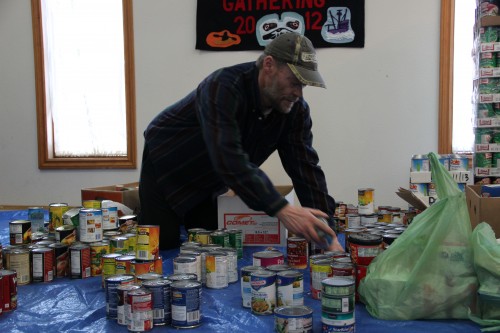 Although the national economy is improving, one aspect of Sitka’s economy is still mired in recession: food prices. The steady climb in prices since 2008 has not reversed, and many families — though doing better — are still living close to the edge.

At Sitka’s Salvation Army post, on the eve of Thanksgiving, staff and volunteers are busier than ever sorting and bagging food.

Evadne: We are pastors first.

Evadne Wright is an ordained minister. She manages the Sitka post with her husband, who she refers to as Major Turnie Wright. The room the couple uses for Sunday worship, prayer meetings, and bible study is now covered with a blue tarp – and rows, and rows of Thanksgiving themed canned goods. The turkeys were on the way.

Evadne is from New Zealand, and moved to Sitka for the Salvation Army post in 2011.

Evadne: Love it! Don’t want to go! So, if the boss is hearing leave me here!

Wright confesses she doesn’t really understand the American custom of back-to-back holidays focused on excessive consumption – Thanksgiving followed by Christmas. But she recognizes that the people who come to her need help. That’s enough motivation to keep her in constant motion – to make sure that those whose fundamental needs aren’t adequately served have options, and access to the comforts of holiday tradition.

She says, “I don’t put a criteria. If they walk in the doors and ask for assistance they are assistance need. It takes a lot of courage to walk through those doors and admit that you’re not doing OK, that you need a hand.”

Since Wright took over the post, she says the numbers of families requesting a box of Thanksgiving staples has increased.

“Although not huge in numbers, last year we did 85. That’s still 6 more families at thanksgiving. This year we are 90. that’s five more families. It’s not huge huge spiking numbers per se, but out of the 90 families that sign up that is 305 people,” says Wright.

But I was curious about the rest of the year – after the holidays, when we typically resume normal diets. Wright says the assistance need is still evident when looking at their food pantry numbers.

So some of the items are very generic, like beans and ramen noodles. Although sometimes not the healthiest it is sometimes the quickest way to sometimes fill a tummy.

Each month families or individuals can drop in and take home a bag of food. In the past three years the number of individuals visiting the food pantry increased by nearly 60%. That’s 500 more people this year, compared to 2010, visiting the Salvation Army for supplemental groceries. What’s really staggering? According to Salvation Army numbers 15 percent — or over 1,300 Sitkans — participated in the food pantry program 2013.

But here’s the thing, while the number of individuals seeking food assistance from the Salvation Army pantry has dramatically increased since 2010, the number of households has decreased.

Wright has an explanation for this. “We have had an increase in family sizes but not, meaning lots of children and stuff, but grandmas who are raising their grandchildren. Grandparents who are on a fixed income who now have custody, because there are families that leave town to work, but sometimes it is not an easy thing to take children along.”

On a larger scale, this story is consistent with the increased number of people signing up for food stamps in Sitka, since 2010. The State of Alaska Health and Social Services counted 820 people on food stamps in for the month of September 2013. That’s almost 1 in 10 Sitkans — a 17% increase since 2010.

Tuesday was distribution day – when families come to pick up their Thanksgiving boxes – Wright was her usual energetic and gregarious self. The recipients were more subdued.

Woman: I got laid off this year, because the restaurant I’m working at full time is remodeling. So it’s a bad time of year to be off. you can’t get help until so much time goes by and then the state will help you. These guys have been awesome, every year I’ve ever needed any help.
Me: Did you come last year?
Woman: Last year I was working so I didn’t need help. So that was nice. So it was really nice to be able to get help this year.

This woman’s need changes, depending on whether she’s working. A temporary loss in income, a slight increase in income that reduces a food stamp benefit, or an unexpected medical bill. It doesn’t take much to push someone through the doors of the Salvation Army. And Wright is there to meet them when they do.