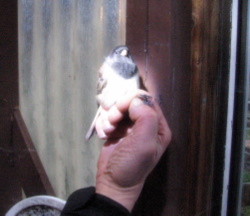 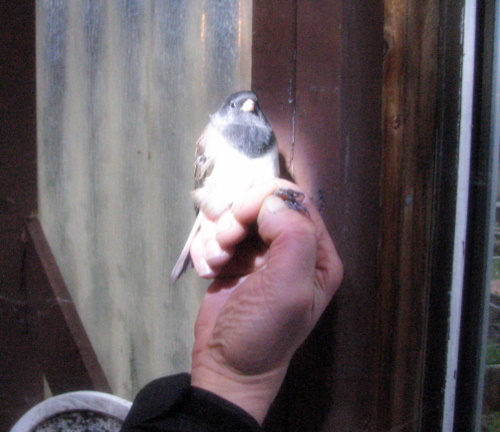 Baluss takes a picture of every junco she bands. The birds are calm while she handles them. (KCAW photo/Robert Woolsey)

Alaska has its share of big science projects, to be sure. But to get results, science doesn’t always have to be huge.

In Sitka, a project in its second year is studying the seasonal movement of juncoes and some other sparrows. It started as a way to involve kids in science, and to answer some basic questions about a species so common that we haven’t taken the trouble to study it.

KCAW’s Robert Woolsey spent some time last week with a bird bander, learning something we never knew about juncoes.

Rob – I don’t think I’ve ever interviewed somebody at a whisper.
Gwen – Sorry, I hope it comes out.

I find Gwen Baluss a couple of blocks up the street from where I live. She’s sitting just inside a downstairs window in the home of Scott Harris, who works for the Sitka Conservation Society. 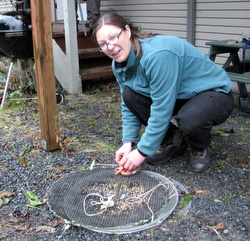 Baluss collapses the trap after a neighborhood cat scares away all the birds. (KCAW photo/Robert Woolsey)

She’s poised by the window, which is slightly ajar, holding a thread. When she releases it, a device known as a “hall trap” unfurls, ideally right on top of some unsuspecting juncoes. There just don’t happen to be any around.

“Yeah. It’s not looking good out there.”

Juncoes tend to arrive at backyard feeders in waves, and the latest flock took flight after a cat stopped by.

Harris’s 7-year old son, Tomy, has been kneeling by the window all morning. He understands the hall trap, and what it’s like to be a few inches away from a creature that most of us only ever see at a distance.

“And when it’s in the middle, you let go of this. You let go of the string, and then the trap comes down on the bird, and then you just go out and get them. It doesn’t hurt them.”

The cat’s visit has pretty much ended trapping this morning. This is a setback, but only a small one. Baluss’s project has a very limited scope.

“I’m not color-banding any other birds in Southeast Alaska, so Sitka’s actually getting a lot of colors. If you see a color-banded bird in Southeast chances are that it came from Sitka, if it’s a junco, chickadee, or song sparrow. Those are the three species that I have the color bands for.”

Baluss is attaching tiny, colored bands to the legs of juncoes — only in Sitka. Anywhere from 1 to 4 bands per bird — like color-coding. Various combinations of white, green, red, blue, and light blue. It’s an inspired strategy.

“That’s the nice thing about color-banding. A bird-watcher, or anyone, who happens to see a color-tagged bird could report those, and we would know which bird that was with a fair level of confidence.”

Baluss is a wildlife technician for the Forest Service in Juneau. Her agency, the Sitka Conservation Society, and the University of Alaska Southeast co-sponsor her research. 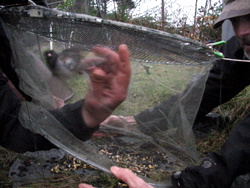 Don’t try this at home. Baluss has a license from the USGS Bird Banding Lab to trap songbirds. (KCAW photo/Robert Woolsey)

After lunch it’s time to change venues. We’re in the potting shed of the community garden, behind Blatchley Middle School. The noise that sounds like hail is actually from the marble-sized raindrops Southeast is famous for.

As I arrive, Baluss and Harris have just bagged a bird — literally. They’ve released the trap, and Baluss reaches in, grabs the junco, and stuffs it into a little cloth sack.

After she attaches the bands, she measures the length of its primary feathers, and checks its fat content. Earlier, she told me you can see right through the skin of small birds. She holds up the junco and starts to gently blow apart the downy feathers on its breast.

Gwen – So, looking at his fat, I’m kind of doing the see-through skin trick again. (Blows feathers.) The kind of yellowish stuff you see there is fat. (Blows feathers again.) Well, actually some of it is corn that he just ate. Stuff in his crop that you can see.
Rob – I’ve been interested in birds since I moved to Sitka but I never knew that they were see-through. That you could actually see their last meal heading down the pipe.
Gwen – Yeah, if they’ve eaten a lot. 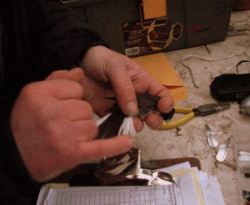 Baluss has banded 44 juncoes in two days, despite the weather. One ruby-crowned kinglet, one white-crowned sparrow, one fox sparrow, and one song sparrow. Last year she did almost one-hundred birds.

And these few birds have already taught us something important. Except for a few slate-colored juncoes that move in each winter from Canada, our local juncoes were always thought to be year-round residents.

Gwen – In that last year, of all the birds that we color-banded, none were seen in Sitka in the summertime at all. So they moved somewhere. Perhaps just out of town where people weren’t hiking. Perhaps much farther than that.

So does this mean an entire population of songbirds moves out of Sitka in winter, only to be replaced by an identical population moving in? That’s a pretty big conclusion, even for small science.