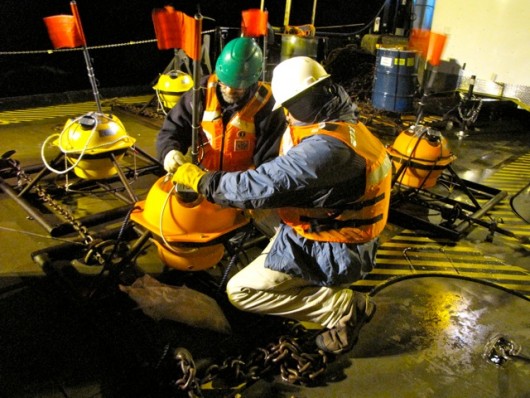 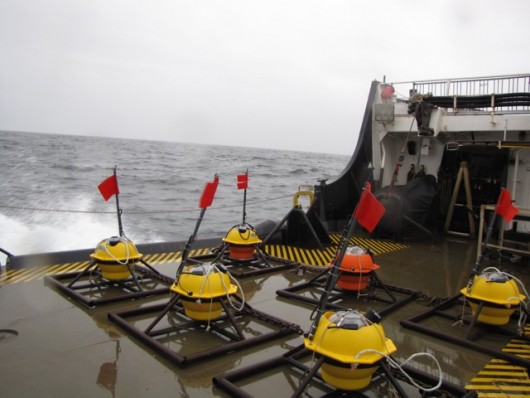 Researchers dropped seismometers from a ship in late April; the instruments settled onto the ocean floor along the Queen Charlotte – Fairweather faults, and recorded data for a month. (Photo courtesy of Emily Roland)

In January, a magnitude 7.5 earthquake shook up Southeast Alaska, and it sent scientists scrambling to study the fault where it originated before the seismic activity subsided.

Emily Roland is a geophysicist with the US Geological Survey, based in Anchorage. In April, she and her team placed a dozen seismometers on the ocean floor, in a long line starting just below Baranof Island and stretching south for 100 miles along Southeast Alaska’s Queen Charlotte – Fairweather faults.

The goal was to record the aftershocks from January’s  earthquake – and the sensors, called seismometers, picked up something interesting.

“Whereas the land-based array recorded about five or so aftershocks that were magnitude 2.5 to 3,” Roland says, “We have recorded a lot more earthquakes that are much smaller magnitude.”

A lot more: about 500 earthquakes in the space of a month. These were small earthquakes, as small as magnitude .5. But even small earthquakes can tell researchers a lot. And right now, there are a lot of things scientists don’t know about the Queen Charlotte – Fairweather fault system, which runs just off the coast of Southeast Alaska and British Columbia. Roland says the fault is similar to its southern, much more famous, cousin, the San Andreas fault in California. But unlike the San Andreas fault, the Queen Charlotte fault runs primarily offshore, underwater and out of reach of sensors on land.

“In terms of basic research, and understanding how faults work, Southeast Alaska is a really exciting place to work,” Roland says.”There’s so many questions about the fault that we really don’t understand.”

Roland hopes the project will help researchers better map the fault system, and better predict what kind of earthquakes we might see in Southeast, how big those quakes might be, and where they might hit hardest.

One of the biggest questions is what kind of movement happens on the fault. The Queen Charlotte is primarily a strike-slip fault, where two plates are sliding past each other, grinding their surfaces together.

“I think of an earthquake as a quick failure, a quick slip that’s happening on a fault surface, between two surfaces of rock,” Roland says. Somewhere, there’s a crack in the rock, “but it’s locked in place by frictional forces. Shear stress along the plane eventually exceeds the strength of the rock, and it breaks very quickly” and that break is the earthquake.

But some parts of the Queen Charlotte system operate differently. They’re so-called thrust faults, in which one plate is being thrust up and over the other. That kind of movement caused A magnitude 7.8 earthquake in October, 2012 near Haida Gwaii. Roland wants to know if that kind of movement happens anywhere else in the system, in part because a thrust earthquake is more likely to cause a tsunami.

To figure this out, Roland and her team dropped the 12 seismometers down to the ocean floor. The instruments are sealed inside glass spheres, each about two feet wide, which are attached to an anchor, and dropped off the side of a ship.

“We really just drop them,” Roland says. “We set them up, we tell them what we want them to do, and we drop them off the side of the ship, and they sink.”

“Within a few hours of being deployed, they actually have a pretty interesting leveling device. The seismometer itself is contained within a box that has a kind of viscous fluid in there, and it has a little thing that unlocks itself, levels itself and locks itself again, so they’re kind of fancy in that regard.”

The seismometers have to be recovered after a month; the batteries only last that long. And that’s an adventure in and of itself.

“We go over the instrument with the ship, and we send some acoustic signals down to it, that tells it to release itself from an anchor,” Roland says. “The way that works is it sends voltage through a little filament, that causes the filament to burn, and disintegrate on the sea floor. Then a little hook raises itself, and the instrument releases itself from anchor, and becomes buoyant, and kind of slowly floats up to sea surface.”

It’s a complicated process, and a lot can go wrong.

“They’re small things,” Roland says. “They’re these little two-foot spheres in the big ocean…Everyone does a little thank you dance, I think, every time you really find one floating in the water and you’re able to recover it.”

Roland’s team recovered seven of the twelve. Another three have been found by people around Southeast, and two are still out there.

The project depended on the cooperation of the Coast Guard, which volunteered ship time.

“I’ve spent a good little bit of time working on large ships doing this type of work,” Roland says. “And of all of the crews I’ve worked with, I think the Coast Guard deck crews, I think they were the best.”

The Sitka-based Coast Guard cutter Maple helped deploy the instruments, while the Cordova-based Sycamore retrieved them.

Roland is now analyzing the data — and she hopes there will be plenty of earth-shaking discoveries to come.