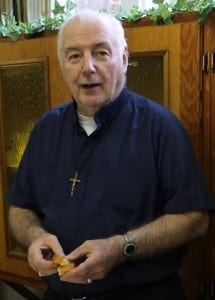 Fr. James Blaney served in parishes and missions across Southeast Alaska for over 25 years. (Photo courtesy of St. Gregory’s)

Father James Blaney, who had served as a pastor in Catholic Churches throughout Southeast Alaska for over twenty-five years, died last Wednesday, December 4, in Sitka. He was 76. The cause of death was cancer, according to family members.

Blaney had served as the pastor of St. Gregory’s Catholic Church in Sitka since 2011. Before that, he served in virtually every parish and mission in Southeast Alaska, including 12 years as the pastor of St. John’s-by-the-Sea Parish in Klawock, on Prince of Wales Island; and time in Haines, Skagway, Hoonah, Petersburg, and Wrangell.

Blaney was described by friends and family as a life-long outdoorsman who loved Alaska.

“When he came to Alaska, he said, you know, I’ve come to heaven without having to die first,” said his younger sister, Mary Johnson, of Port Orchard, Washington. “He just loved it here. Always wanted to be in Alaska.”

Father Peter Gorges of Sitka and Father Pat Casey of Juneau remembered a man who could – and would – talk to anyone.

“He was always good company,” Gorges said. “He would talk to anything that moved.”

“I think one of the unique things about him as a missionary Oblate, is that he was able to reach and talk to the most marginalized people,” Casey said.

Blaney made a point of joining the volunteer fire departments in the communities where he served, Gorges said. In Sitka, he was a part of the Coast Guard auxiliary. When a local food pantry was overwhelmed, he started a Saturday lunch for Sitka’s homeless in the church basement.

A  procession to the funeral mass was to be held on Tuesday, December 10, in Sitka, weather permitting, from St. Gregory’s Church to Harrigan Centennial Hall. Blaney will be buried on Thursday at the home of his order, the Oblates of Mary Immaculate, in Tewkesbury, Massachusetts.