Joyce Kamwana: A new life speaking out as HIV-positive 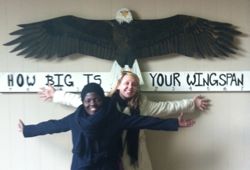 The international health community is celebrating the recent announcement by the United States and others to commit $12-billion to the Global Fund.

Since its inception in 2002, the Global Fund has raised billions to treat three major killers in the developing world: HIV/AIDS, tuberculosis, and malaria. Any one of these diseases is a huge problem on its own. But because HIV/AIDS weakens the immune system, many people often get all three — at the same time.

KCAW’s Robert Woolsey recently met one such person, who traveled 12 time zones to share her story. 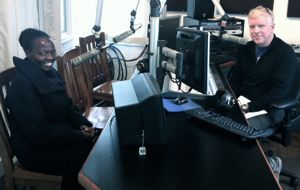 Joyce Kumwana in the studios of KCAW in Sitka, twelve time zones away from her home in Malawi. (RESULTS photo/Crickett Nicovich)

It’s November in Alaska, and it’s cold outside, and here in the studio it’s pretty warm. But the woman across the console is bundled in layer upon layer of wool coats and sweaters.

“My name is Joyce Kamwana. I come from Malawi, which is in the sub-Saharan region of Africa.”

Joyce Kamwana is an ambassador. But she’s not the kind of ambassador who rides around in a limo with flags on the fender.

“The reason I’m here is to basically give a face and a voice to HIV/AIDS.”

Joyce traveled to Sitka to speak our local RESULTS group in support of the Global Fund. The anti-retroviral therapy she received — that saved her life — was paid for through one of the first grants to Malawi by the Global Fund.

Joyce doesn’t want to impose her religious beliefs on anyone, but she feels God has given her a second lease on life — and she’s not going to waste the opportunity, even if it means bundling up like the “Michelin woman” and speaking to a reporter in another hemisphere of this planet, who may as well live on another planet.

“I look at this as my ministry. At the same time I look at what I went through: I was someone who had gone to college. I had a well-paying job in a managerial position as a bottom-line manager at a central bank. I went through thick and thin. I went through hell.”

Joyce learned she was HIV-positive in 1988 when she was 25 years old. She had two children, and the one still breast feeding also tested positive. So did her husband. In Malawi, Joyce says, people were quick to judge.

“If somebody was HIV-positive people tend to think that you are someone of loose morals. You got it because you were promiscuous and what have you. But when I got it, I was married. I was infected on my marital bed.”

Joyce says he died in ignorance. She does not know where he contracted the virus, but she believes that — had he known he was exposing his family to the disease through his behavior — he would have taken measures.

“And that has taught me to forgive. Not to hold a grudge against him. He died in 1991 and I’m still here to share this story.”

Her story is painful to recount. Although her husband’s behavior infected her, she was stigmatized. She lost her job at the bank. Her immune system deteriorated, and she contracted tuberculosis. Malaria, which she had fought continuously since childhood, got the upper hand.

“I literally stared death in the eye. I got very sick to the point that I would fear I was dying. I remember on several occasions when I was whisked to hospital I would hug my children and start crying, Lord, I don’t want to die because I don’t want to leave my children very young. I still have responsibilities to look after them because their father was already gone.”

She had two bouts with tuberculosis and malaria. Each would leave her seriously weakened, and unable to walk more than a few steps without resting. A simple task like lifting a pail of water was impossible — for months at a time.

Despite the social stigma, Joyce decided to be open about HIV, and joined a support group. There she learned about anti-retroviral therapy, and programs offered in Malawi sponsored by the Global Fund.

When she recovered, Joyce met friends — even family members — who told her they were sure that they would hear news of her demise any day. Joyce says that was not an uncommon attitude in Malawi: HIV is a death sentence, and you probably are getting what you deserve.

That angered her a little, because she believes death is God’s call, and no one else’s.

“That probably drove me into doing what I do now. Because I feel there are people who also need support. Somebody to talk to. Somebody to encourage them. To say, You know what? Testing HIV-positive is not the end of life. It’s actually the beginning of a new life. And I do that quite a lot: Giving hope to others.”

Joyce Kamwana is fifty years old, and happy. What I can see of her face beneath the wool scarves and hat seems to radiate joy at the prospect of giving yet another interview about her nightmare of HIV. When I ask her why, she says, “I never thought I would live this long.”