Nose to snout at Sitka’s Fortress of the Bear 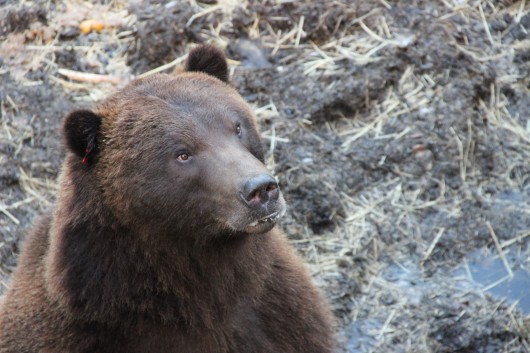 All of the brown bears at the Fortress of the Bear were orphaned as cubs, and captured by Alaska Department of Fish and Game biologist Phil Mooney. (KCAW Photo / Rachel Waldholz)

A decade ago, when Les and Evy Kinnear proposed creating a bear rescue center from the remains of Sitka’s  decommissioned pulp mill, the plan raised some local hackles. Ten years later, the Fortress of the Bear is home to five brown bears and two new black bear cubs — and it’s about to embark on a major expansion, building a black bear enclosure this winter. Along the way, it has converted some skeptics, including local biologist Phil Mooney. But it still has a ways to go to fulfill the Kinnears’ ambitious vision.

Les Kinnear may sound like he’s talking to a toddler…

But Balloo is an 800 pound brown bear.

Kinnear runs Sitka’s Fortress of the Bear with his wife, Evy. He’s standing nose to snout with Balloo, a four-year-old, seven-foot-tall brown bear, separated by only a couple inches and a metal grate door.

Kinnear was a hunting guide for years, hunting bears along with other big game. Now, he and his wife care for seven bears in the remains of Sitka’s old pulp mill. The bears were all orphaned as cubs, and would otherwise have been euthanized. Asked why he started the Fortress, Kinnear says, “Well, all you gotta do is have one of those little bears sit there and lick you on the hand, and you know the answer to that one. That’s simple.” 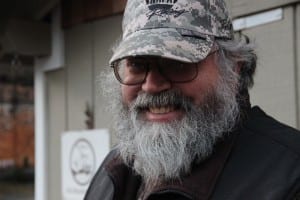 Les Kinnear runs Sitka’s Fortress of the Bear with his wife, Evy, caring for seven bears in the remains of a decommissioned pulp mill. (KCAW Photo / Rachel Waldholz)

The two giant clarifying tanks from the old pulp mill have been converted into bear pens, with high concrete walls.

WALDHOLZ It has kind of a post-apocalyptic feel in here.

KINNEAR [Laughs] Yes, it does.

It’s not just the bear pens. All the facility’s buildings were salvaged from the pulp mill or hauled over second-hand. Everything is rusty. There are piles of tires, sacks of supplies. A flock of assorted poultry roams around. It’s a scrappy operation.

When the Fortress was first proposed, a lot of Sitkans weren’t thrilled. Phil Mooney is the area wildlife biologist for the Department of Fish and Game.

“We have one of the highest known density of brown bears in the world. In the world!” Mooney said.  “So people were saying, why would you put a zoo here? It’s a good question.”

Mooney was skeptical at first. And he wasn’t the only one.

“Letters went to the governor,” he said. “It was pretty divisive in the beginning. There was a big campaign to keep our bears wild, that people come here to see wild bears, not zoo bears. There was a lot of very strong emotional response.”

But Mooney has since changed his mind. He remembers a delegation visiting from the Bronx Zoo. One of the women kept saying how impressed she was with the facility.

“[And] I’m like, OK, I’m missing something,” Mooney said. “And she turned to me and said, you’re missing it because you’re thinking about this facility as a person. You have issues with the aesthetics of it. The bears don’t care about the aesthetics. They care that they have three quarters of an acre in there and they can dig, and do anything they want, like a real bear would.”

But what really made Mooney a believer was when the Kinnears invited Sitka’s  third- through fifth-graders out to the Fortress. The Kinnears pitched two tents in the bear enclosure. Inside each was a sleeping bag with a hot dog in the bottom.

“And the bears ran straight over to the tents, slit them open, pulled the sleeping bags out, ripped the hotdog out,  held the hotdog up and showed the kids,” Mooney said. “And the kids were like, I’m never taking food in my tent again!”

Mooney was impressed. He spends a lot of his time on bear education, trying to train people to avoid the kinds of interactions that lead to dead bears and orphaned cubs – in other words, the kind of situations that brought these bears to the Fortress in the first place.

KINNEAR This is Killisnoo. If you hold the mic up here you can probably hear him breathe. [breathing]

Killisnoo was the Fortress’s first bear. Mooney captured him as a cub in the summer of 2007, after his mother was shot trying to enter a lodge near Angoon.

“He was malnourished, dehydrated, terrified, traumatized,” Kinnear said. “He had all the hair burned off his front paws clear to the shoulders, a belly   full of tapeworms, a mouth full of broken teeth.”

“We started working with him right here in this training room, and by the second day we could hand-feed him.”

Kinnear says he understands why some folks object to the idea of the Fortress – in an ideal world, brown bears shouldn’t live in old clarifying tanks. His grand vision for the Fortress is much more ambitious. He wants to expand the habitats and eventually start rehabilitating bear cubs to return to the wild. This has been done in British Columbia and the lower 48, but isn’t permitted in Alaska.

“We aren’t going to save a lot of bears,” Kinnear said. “We’ve only done a dozen in the last ten years. Some of the other places around the country where they process and release, they’re into the hundreds!”

Mooney says releasing bears isn’t likely any time soon. But he says the Fortress has a role even without that: He thinks these bears in captivity might turn out to be some of his best tools for keeping the rest of Sitka’s bears wild.