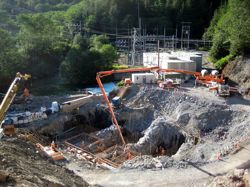 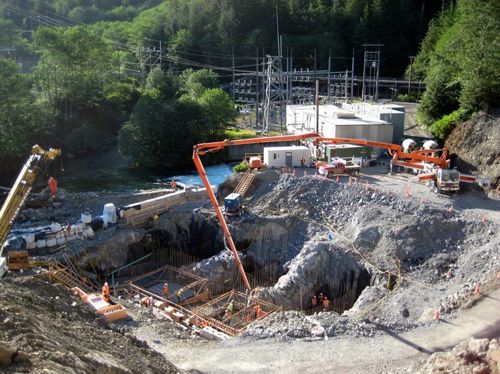 The governor’s budget has a healthy chunk of money for Sitka — but it’s not the money local officials were hoping for the most.

City Hall had its fingers crossed for $18.5 million dollars to finish off the Blue Lake Hydro project.

Governor Parnell dropped by Sitka in early October. He met with Mayor Mim McConnell and interim administrator Jay Sweeney during his visit. The subject of their conversation was “the Ask”: Sitka’s request for $18.5 million to complete the Blue Lake Hydro expansion.

Parnell was non-committal at the time. When he unveiled his 2015 capital budget on Thursday, Sitka got its answer.

“I was hoping for better news,” says Mayor McConnell.

The question now for Sitka is not whether it will have to go to the bank to finish the Blue Lake project, but which bank to go to.

The most-discussed option is bonding the rest of the money. Recently, however, the city’s lobbyist, Larry Markley floated the idea of borrowing from the Alaska Energy Authority. The AEA has a little-utilized pool of money called the Power Project Loan Fund. The interest rate is variable, and could be as low as zero.

McConnell says this might be an attractive option for Sitka.

“If we can get a better interest rate through the Power Project Loand Fund than through the bond market, then that’s probably what we would do: try to get the best deal that we can for the community.”

The Municipal Bond Bank has already granted Sitka the authority to bond over $80-million for the Blue Lake project, and the city has already used $62-million of that. The assembly was really hoping to avoid bonding the remaining $18-million, if at all possible — hence the Ask to Governor Parnell.

There’s still one other possibility: Sen. Bert Stedman and Rep. Jonathan Kreiss-Tomkins might be able to include the funding when the legislature gets a hold of the budget when the session starts in January.

“Optimistic would not be the word,” says Jonathan Kreiss-Tomkins. He’s not surprised that the governor is pledging to make deep spending cuts. The state revenue forecast is down $2-billion. The governor’s office has attributed the decline to a decrease in oil prices, and a decrease in the amount of oil flowing through the pipeline.

Kreiss-Tomkins believes it’s his worst fears about the governor’s tax breaks for the oil companies coming to pass.

Sen. Stedman could not be reached in time to comment on this story. A member of the Republican majority, the most realistic route to legislative support is likely through him, but — like Rep. Kreiss-Tomkins — Stedman also opposed key elements of the governor’s oil tax plan.

Mayor McConnell is braced for Sitka to go it alone.

“We’ve been ready for the worst-case scenario. So, we’re ready.”

Timing could be a factor in whether Sitka chooses to issue a fourth bond for the remaining $18.5-million, wait for legislative support, or borrow from the Alaska Energy Authority, which would still require legislative approval: The money will be needed beginning in September 2014. With rising interest rates, city officials may be reluctant to roll dice on a better deal in the legislature.

The Blue Lake Hydro Expansion project is the most expensive in Sitka’s history. Total cost for the project — including new backup diesel generation — is $157-million.