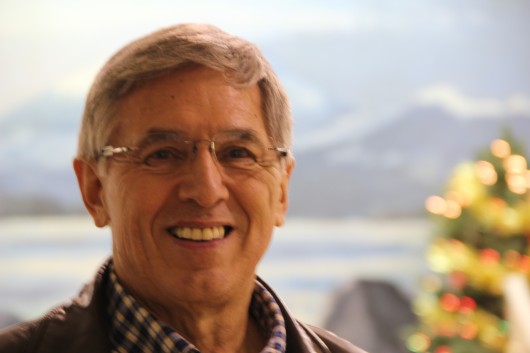 Democratic candidate for governor Byron Mallott visited Sitka on Wednesday night (12-18-2013). He spoke to about forty supporters at ANB Hall with this message: Government, he said, can do good.

It was Mallott’s first visit as a candidate, but he’s no stranger to Sitka. Mallott is from Yakutat, and attended Sitka’s Sheldon Jackson High School.

Speaking to those in the audience who attended Mount Edgecumbe High School during the same era, Mallott said, “I want you to know that we prayed for you.”

Met with silence, he continued,

MALLOTT You don’t get that.  [LAUGHTER] Sheldon Jackson was a Presbyterian boarding school, Mt. Edgcumbe was a B.I.A. [Bureau of Indian Affairs] boarding school, and we always felt we had to pray for those heathens across the channel. [LAUGHTER]

Though his roots are in Southeast, Mallott argued that he’s more than a regional candidate. He has served as the Executive Director of the Alaska Permanent Fund and as CEO of Sealaska, the regional Native corporation, in addition to stints as mayor of Juneau and Yakutat.

Mallott was asked about Senate Bill 21, the controversial legislation championed by Republican Governor Sean Parnell, which cut taxes on the oil industry. Mallott said he will vote to repeal SB21 when it comes up in a referendum next year. He said that ordinary Alaskans were not included in the process creating the legislation, and it tipped the balance too far toward tax cuts.

“Now, I’m not sure what the best tax balance might be,” Mallott said. “But I know that as governor I will work as hard with the industry, with the legislature, and involve Alaskans to the maximum degree possible, to help inform and get their support to get the best balance possible.”

On another resource issue of particular interest in Southeast, Mallott said he fully supports the Sealaska land bill, which would transfer about 70,000 acres of the Tongass National Forest to the Southeast regional Native corporation.

“It hasn’t been a polarizing issue,” he said. “The people who oppose it are very vocal for sure. [But] it has very broad-based support, it’s been in the mill for over a decade.”

“It has been compromised appropriately and necessarily by virtually every group that has concerns with it…but it is an example of how sensitive resource allocation is in our state, and there were many lessons learned.”

Mallott has been endorsed by the state Democratic Party. The Democratic primary is next August. The general election will be held on November 4, 2014.