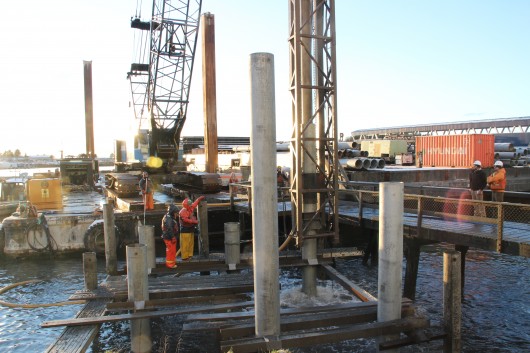 In November, work began on Sitka’s ANB harbor. The $7.7 million project will demolish all of the existing structures and replace them with new floats and pilings by early spring. But a small invader in the harbor has added a wrinkle to the usual process.

Workers with the Seattle-based contractor Pacific Pile and Marine are driving piles into the seafloor at ANB Harbor. Sitka City Engineer Dan Tadic watches from the parking lot at ANB Hall. 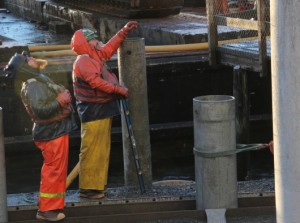 In between drilling, workers blow air into the piling to clear out cuttings and advance the drill, sending water and cuttings spitting out of the top of the piling. (KCAW photo/Rachel Waldholz)

“What they’re doing right now, they’ve got the basically the tip of the piling on rock, and they’re starting to drill into the rock,” Tadic says.  “And every few feet or so they’re using air to blow the cuttings back out of the piling, so it almost looks like the water is boiling.”

The contractors are drilling about 13 feet into rock to set the pilings. They stop occasionally to flush out the cuttings. At those moments, with water bubbling up and cuttings spraying from the top of the piling, it looks like they’ve struck oil.

The contractors will put in over 60 new galvanized-steel pilings, ranging from 12 to 24 inches in diameter. Those will be followed by brand new floats. The work has to be done by March 15, in time for herring season.

But there’s a side story to the project. In 2010, volunteers with Sitka’s Bioblitz survey found a pair of invasive tunicates – small marine invertebrates – in ANB harbor, as well as several other Sitka harbors.

These tunicates aren’t d. vex (Didemnum vexillum), an invasive tunicate that many Sitkans have heard about before — and that is sometimes compared to the creature from the 1950’s horror movie, The Blob. D. vex can grow extremely fast, blanketing and smothering entire ecosystems. It was found in Sitka’s Whiting Harbor in 2010 — and that’s still the only place in Alaska that it’s been found.

The tunicates in ANB harbor are called botrylloides, or harbor star and golden chain tunicates. And they’ve been much better behaved than d. vex – so far.

Marnie Chapman is a biologist at the University of Alaska Southeast.

“We’re interested in watching the botrylloides group,” Chapman says.  “Because even though at this point there hasn’t been demonstrated massive growth of these, a lot of times what invasives do is they can hang out at very low levels and then all of a sudden something will change about the environment and then they’re able to grow and expand rapidly.”

The concern is that, given the right conditions, the botrylloides in ANB Harbor could suddenly explode, choking out native species. So though the botrylloides have remained fairly contained thus far, officials hope to avoid spreading them further. Because of this, the ANB Harbor project permit requires that all of the material from the harbor be disposed of in a different way than usual.

“A lot of times what happens in Alaska is bits and pieces of harbors get sent all over the place when harbors are decommissioned,” Chapman said. “And so it’s potentially a really effective way of spreading invasive species to really pristine areas in Alaska, to take pieces of harbors and move them somewhere else.”

Instead, the material from ANB harbor will be barged down to Seattle and disposed of on land. The wood will be taken to a landfill. The steel piling will be recycled. And officials hope the process will prevent the harbor’s  invasive stow-aways from hitching a ride to any other Alaskan ports.