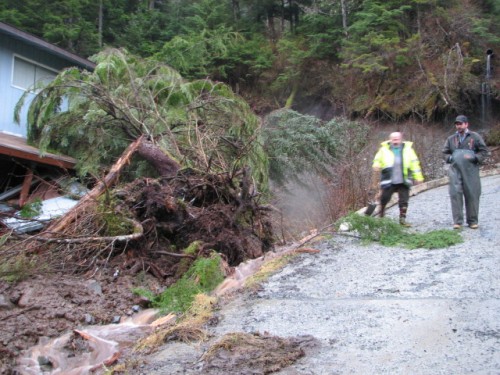 If you’re driving around Sitka today (1-14-14) you might notice that things look a little different. For instance the moose sculpture at Swan Lake is up to its antlers in water. And what was the Indian River trailhead parking lot is now a shallow pond.

Joel Curtis, a meteorologist at the national weather service office in Juneau says flooding like this is unusual in Sitka, but the cumulative rainfall is not. According to Curtis, one report measured 7 inches of rain from midnight last night to 10 AM this morning. 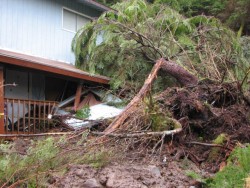 Curtis says this is a lot of rain, but not a record amount. “It’s certainly above normal for this time of year and ordinarily we’re thinking a little snow mixed in or something like that. So this was quite a warm system that came up here. I’d say you just keep putting water on water and snow melting up in the mountains and pretty soon you’ve got some problems going on.”

Like a landslide. Curtis says that this is common when freeze thaws and loosens up rocks, soil, and tree roots. One house in the Cascade Creek neighborhood got the brunt of it.

Me: How was he able to intervene?

Bickar: The creek wasn’t under control and it was flooding the street and flooding down into the other property owners’ property. So as soon as he got here, he rerouted the creek and that prevented any damage to people down the street.

Fire Department Chief, Dave Miller was also at the scene.

Miller: I think we started getting calls that there was water problems 6:30 a.m. or 7 a.m., something like that. 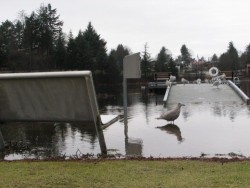 Miller spoke with long-time residents who confirmed that this type of flooding is unusual for Sitka.

Miller said, “One of the houses I went to, the lady said this is the highest the creek behind her house has ever been, and she’s been here a long time.”

While we’ll have a bit of a break from heavy precipitation, Curtis say Sitkans should remain cautious. He says the streams are booming right now and there’s still potential for a wash out.