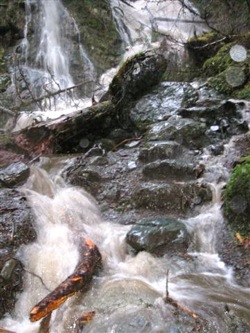 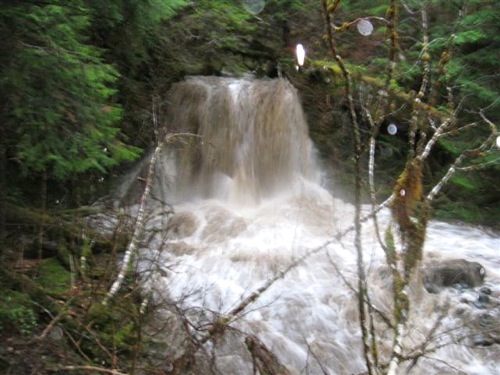 The lower falls at the Herring Cove trailhead. Upstream, several sections of the trail are under fast-flowing water. (Bill Foster photo)

Three days of heavy rainfall has generated serious runoff problems, even in areas outside of Sitka. The Herring Cove Trail was first damaged by runoff during an unusual rain/snowmelt situation about five weeks ago, when water carved a new channel in the trail just below the log bridge at the upper falls. Now, water has filled that channel again, as local naturalist Bill Foster discovered this morning (Tue 1-14-14, see photo below).

This picturesque waterfall is actually the trail. Note the stepping stones at right. (Bill Foster photo)

Additionally, the falls midway up the trail have been diverted by a large log, and that section of the trail is in the process of being washed out. Forest Service landscape architect and trail designer Barth Hamberg says extensive maintenance will be needed to return the trail to its former condition. Investment in mitigating nature, however, is a calculation: “You can overbuild,” Hamberg says, “for things that may or may not happen.”

At Beaver Lake, the site of a major landslide two years ago, the trail is weathering the storm quite well. But Bill Foster reports 72 of the stepping stones on the north side of the lake are under water — some up to the top of his XTRATUFF boots! 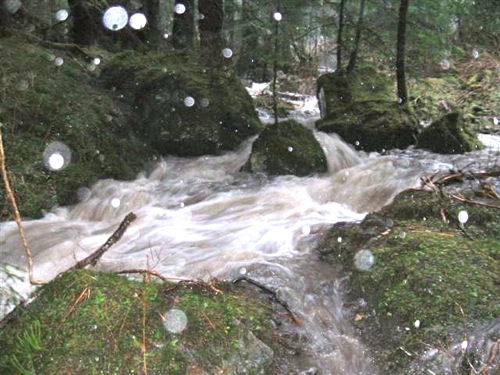 This section of the trail, just below the upper bridge, washed out five weeks ago, during a snowmelt event. Today, it’s whitewater. (Bill Foster photo)