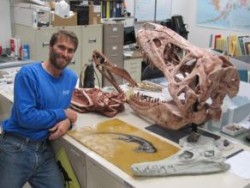 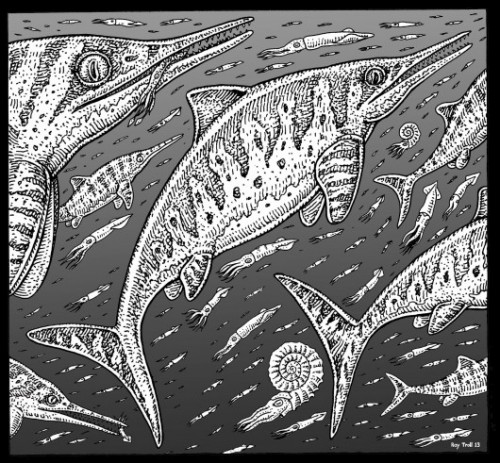 The only vertebrate paleontologist in Alaska will give a seminar tonight (1-16-14) about what we can learn from Triassic era rock found all over Southeast Alaska.

Patrick Druckenmiller is also the Earth Science Curator at the University of Alaska Museum in Fairbanks. He says that 210 million years ago the rock that lines Southeast Alaska used to be in an entirely different latitude; with entirely different animal life: marine reptiles.

Druckenmiller: So we have these ancient rocks that hold evidence of such a very different world. When Alaska hadn’t even been assembled yet, when this part of Alaska, Southeast Alaska was in tropical latitudes, and was a series of volcanic islands, and these marine reptiles were swimming on the margins of these islands. Sort of a tropical paradise. That was Southeast Alaska 210 million years ago.

Druckenmiller studies the fossils of these marine reptiles, and says that Southeast is the best place in Alaska to find them. He says that in the Triassic age, instead of whale watching, you could have gone ichthyosaur watching around the islands that now make up Southeast.

An ichthyosaur is a type of marine reptile, which Druckenmiller says is particularly interesting because of how much they can range in size. The reptiles could be as small as a harbor porpoise, or as large as a blue whale.

In his seminar, Druckenmiller plans to share findings on a small ichthyosaur specimen that was found in Gravina Island years ago.

Earlier this year, Drukenmiller worked with fossil preparators to clean a Thalattosaur fossil, another type of Triassic marine reptile, which was discovered near Kake two years ago. Scientists believe it is a new species of Thalattosaur, and Drukenmiller says they’ve already chosen a name. Although, it’s a secret until they finish the cleaning process, and follow proper publishing protocol.

Druckenmiller says that he enjoys his work because it’s a really good reminder of how short a period of time we’ve been on this planet compared to all the life in the past of the world. It’s humbling.

The seminar titled Triassic Marine Reptiles from the Tropics of Southeast Alaska starts at 7:30 p.m. at the University of Alaska Southeast.

You can read about the Thalattosaur fossil discovered near Kake here.