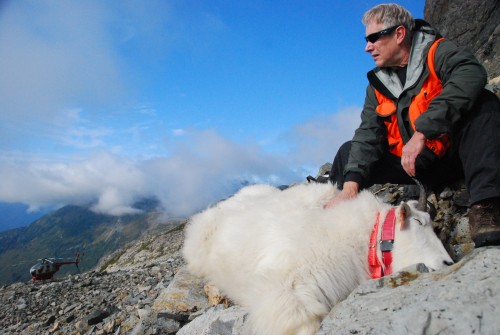 It doesn’t take much to trigger an emergency mountain goat closure on Baranof island. Because of recent population declines, if a hunter shoots one nanny, a large swath of the island may become off-limits. Years of detailed research has shaped today’s goat hunting guidelines — which might seem like a lot of effort considering that only a handful of Sitkans have the stamina to hunt goats. But the process has revealed much more than how to manage the goat population. We now have clues to what Baranof looked like before there were hunters.

When the helicopter hovers within 30 feet of the goat, White leans out of the open door, with one foot on the skid, and aims at a dirty spot on the goat’s coat the size of a saucer – a natural bullseye of dirt on the otherwise brilliant white coat.

“I’m sitting on the opposite ridge as I see Kevin bail out of the helicopter going after the goat that’s headed for the cliff,” says Mooney.

White had darted the goat with a heavy tranquilizer that takes seven minutes to kick in. It would be a grizzly end for the goat if it were bounding over the cliff once it did.

“I’m thinking he’s still got his flight suit on and goat horns are sharp. He gets tangled up with that and the goat goes over the cliff he’s gonna go with it,” says Mooney. “And he ended up about 11 feet from the edge of the cliff.” 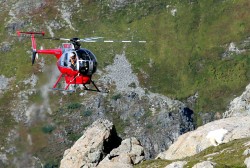 Almost a century before biologists were jumping out of helicopters to tackle 300 pound mountain goats, there were no reported goat sightings on Baranof island.

Mooney says, “this place was covered by miners in the late 1800s and 1900s searching for gold and silver. Nobody reported seeing goats.”

Back then, residents wanted more big game hunting options. So, in 1923 the state transplanted 18 goats to Baranof island from Tracy Arm. To protect the population, wildlife biologists have been studying the goats ever since – through aerial surveys, GPS tagging, and tissue samples.

“Which is nothing more than a piece of flesh the size of a pencil eraser,” says Mooney.

The DNA in those samples revealed something unexpected: evidence suggesting that an unknown goat population may have already been living on Baranof Island before the Tracy Arm transplant.

“They were only expecting to find the Tracy Arm DNA in there,” says Mooney. “And low and behold there was other DNA in there that comes from a relic.”

10,000 years ago Southeast Alaska was covered in hundreds of feet of glacial ice, except for a few isolated pockets called “refugia.” The samples Mooney and White found matched DNA from an ice-age goat population near Haines. That means the transplanted goats bred with goats that were already on Baranof Island, but were absolutely unknown. Mystery goats.

Mooney says, “What, a UFO came and dropped off a bunch of goats how could that be?”

“It’s just like a kitchen timer, when that day and time come up it sets up a small explosive charge in the collar that blows the springs on the plate and the collar falls to the ground,” says Mooney.

At $5,000 a piece, Mooney makes sure to retrieve the collars. If a goat dies in an avalanche and is carried down a valley, Mooney might end up in devil’s club up to his head, fishing for the device.

But Mooney says it’s worth it. The goats aren’t harmed. White reverses the tranquilizer with an injection, and within minutes the goat is up and running.

And they’ve learned a lot from the data. Mainly, the best way to protect nannies. It’s the reason why there are goat hunting zones, why shooting a single nanny will close a zone, and why we still have a goat hunting season at all.

Mooney says, “we’ve got a situation up by Yakutat where the population declined significantly. It’s been closed now for 15 years.”

Goat hunting is rigorous. Not many have the stamina to traverse high rocky cliffs, shoot a 250-pound animal, and then pack out a heavy load of meat and hide. But a wildlife management strategy based on science can produce fundamental discoveries important to all of us, and not just to the hunters.