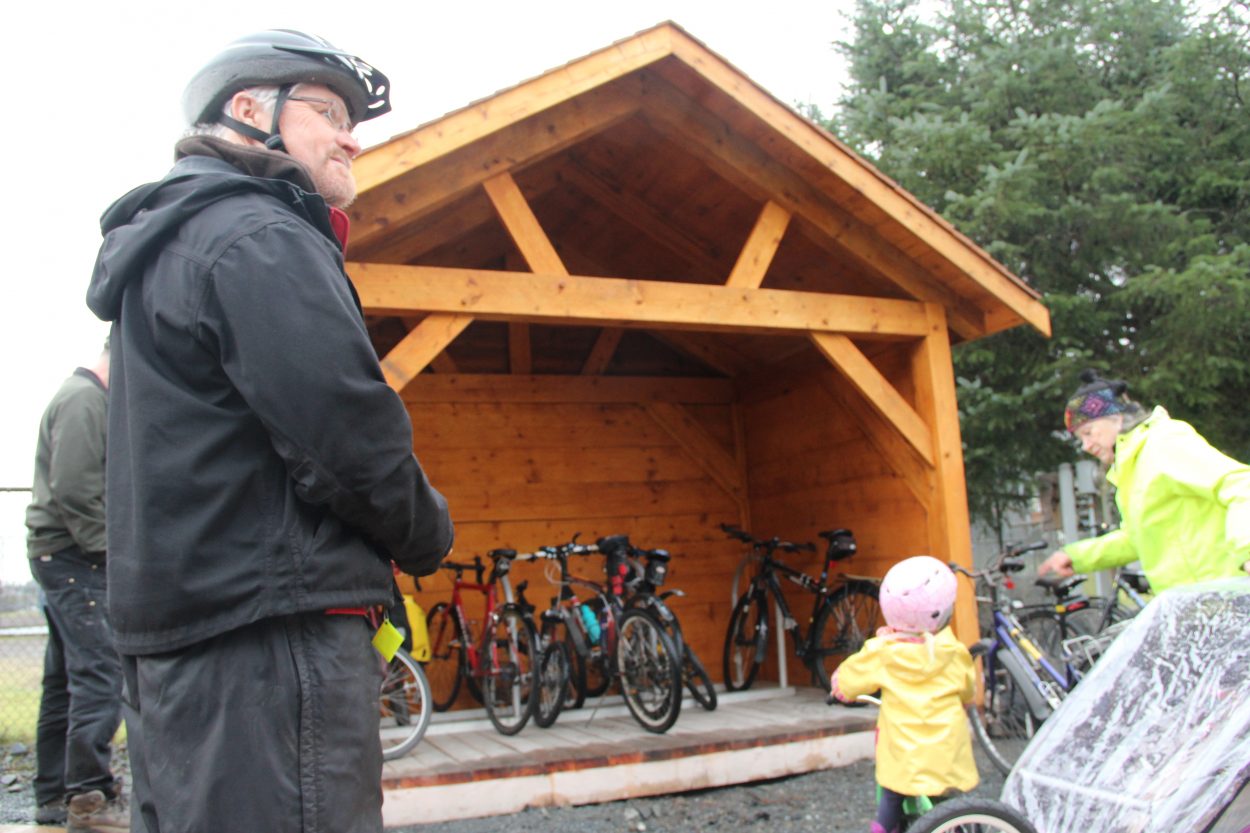 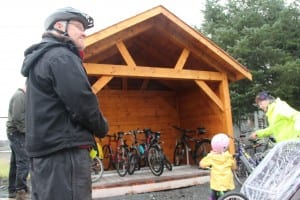 The shelter is built entirely from locally-sourced wood: Sitka spruce for the frame, cedar for the siding and shingles. (KCAW photo/Emily Forman)

Sitkans this week (Tue 1-28-14) dedicated a new bike shelter downtown. The small, timber-framed structure is actually the culmination of a large undertaking to help develop an industry around young-growth trees in the Tongass.

It’s a little building, only 10×12 feet square, but its heavy timbers and mortise-and-tenon joinery make you feel like you’re in the entryway of a lodge or a church. 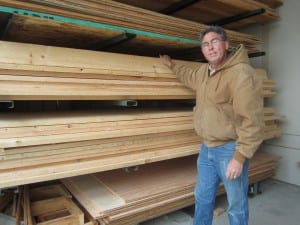 Randy Hughey inspects the spruce boards after they’ve been barged from Prince of Wales. (SCS photo)

Now-retired high school wood shop teacher Randy Hughey built the bike shelter with his construction class last spring, after meeting a trained timber-framer who had stopped by the shop during an open house to admire some student furniture. Dan Sheehan had just moved to Sitka from Massachusetts.

Hughey admitted to the small crowd gathered at the shelter’s dedication that becoming involved in forest policy was not exactly his top priority for working on the project.

“My primary interest in this whole thing is as a woodworker.” he said. “I have enjoyed this kind of project my whole life, and this was really fun. I really hope that it serves well, and that it calls attention to the potential of the second-growth forest.”

So while it’s not connected to a lodge or a church, the little shelter is part of something larger — an effort to utilize the trees that have re-grown in the clearcuts of past decades.

Andrew Thoms is the director of the Sitka Conservation Society, which spearheaded the shelter project.

Young growth is a large industry in the lower 48, but the economics of timber harvesting are different there. Much of the old growth is gone. Thoms believes the Tongass is stuck in a paradigm.

“In Southeast Alaska we’re still logging old growth. There are still huge old growth timber sales that are happening in very important ecological lands, that are very uneconomical to harvest. But the system is still set up that old growth is being harvested. That’s the momentum that the Forest Service is on.”

Helping change that momentum is an objective of the Sitka Conservation Society, but they can’t claim the idea. Secretary of Agriculture Tom Vilsack outlined the transition to second growth in a speech in Seattle shortly after he was appointed by the newly-elected Barack Obama. He reiterated his position last summer. 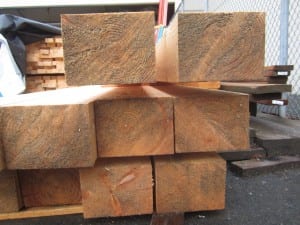 The beams for the shelter were milled to order in Thorne Bay. (SCS photo)

But making that transition has not been easy in the Tongass. The bike shelter demonstrates why. First, the Forest Service had to develop what’s called a “stewardship” sale on Prince of Wales Island — the selective harvest of timber in a second-growth area. In this case, the sale was at Winter Harbor. Next came finding a mill owner willing to custom cut the logs — that was Last Chance Enterprises in Thorne Bay. Then, kiln drying at Good Faith Lumber, and then the cutting of shingles and siding at H&L Salvage — again in Thorne Bay.

Marjorie Hennessy, also with the Sitka Conservation Society, says this route was a mixture of necessity and intention.

“It’s important to have all of those stakeholders involved somehow and have their hands on the project, from the millers down on Prince of Wales to a volunteer who was just putting a nail in the siding. We just want to make sure that everyone understands the importance of young growth and what it can do for our communities.”

So what can it do for our communities? Randy Hughey’s students got a look a potential vocation. Maybe someone else will see this shelter tucked between the Sitka Sound Science Center and the Crescent Harbor playground and imagine other potential. At least that’s what Andrew Thoms hopes.

“The bike shelter’s definitely overbuilt, but in doing that we learned what we can do with it, people learned how to do it. And now it’s our hope someone’s going to look at that and say, I want a house built out of it. Or if you’re a contractor or a builder, I can do this with that material. It’s really a showcase piece to sort out the kinks, and then inspire on what we can do next.”

Funding for the second-growth bike shelter came from the National Forest Foundation — their Community Capacity and Land Stewardship Program. Two other previous second-growth projects are not far away — recreational log cabins in Sitka’s Starrigavan Valley and in Wrangell, both managed by the Forest Service.