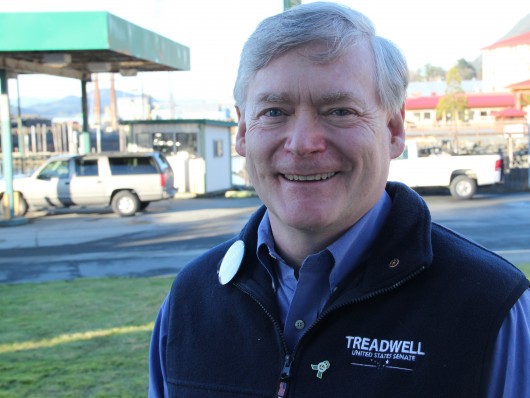 Alaska Lt. Governor Mead Treadwell is seeking the Republican nomination to run for the U.S.  Senate against Democratic incumbent Mark Begich. Begich is up for reelection in November, and the race is being closely watched nationwide. Unseating Begich is a top priority for Repubicans, who are hoping to wrest control of the Senate from Democrats in 2014.

Treadwell came through Sitka on Friday, January 24. He spoke with KCAW about public lands, personal privacy, climate change, and what, exactly he means when he promises to “bring decision-making home.”

“I think most Alaskans agree with me today that we have a federal government that spends too much,” Treadwell said. “It borrows too much. It prints too much money. It meddles too much in human affairs, in our personal affairs. It snoops too much. And I hear that from Republicans and Democrats across the board.”

“I think we have to go back and remind Washington there are limits to power, that Washington doesn’t need to try to solve every problem, that we don’t need a bureaucracy for everything, and that people in a free society can make decisions for themselves.”

Treadwell emphasized his support for increasing oil and gas production, and proposed giving the state more control over public lands.

“If you ask the average American, and you certainly get this from the average Alaskan, we want you to develop our resources to have jobs and we want you to protect the environment,” he said. “Right now the federal government is not doing a very good job of developing jobs on public land. That’s why the House of Representatives passed a measure to do a pilot project to try to turn Forest Service land over to the state of Oregon, for example, and why we ought to be looking at that with our state forests. I think Alaskans are smart enough to make good environmental decisions on our land, and to have a sustainable economy.”

Treadwell also emphasized his background in science and technology – among other roles, he has served as chair of the U.S. Arctic Research Council and as Deputy Commissioner of the Alaska Department of Environmental Conservation. Asked whether the federal government should be taking more action on climate change, Treadwell said he opposes any action that might increase the cost of fossil fuels.

“I think the first thing is that we need to understand our own limits as people,” Treadwell said. “I don’t know that we’re going to be able to change the weather. I do know that ultimately we can make energy cleaner. But I’m going to be representing a state that’s known for three things: cold, dark and distance. And I’m not going to be pushing to raise your energy prices. I’m sorry.”

But, Treadwell said, government does have a role in promoting renewable energy.

“I’m very much in favor of research and development that’s going to get us cleaner energy over time,” he said. “We’ve got hydroelectric. We’ve got geothermal. We’ve got tidal. We’ve got wind. And I’m very much a proponent, as a conservative — I’m ready to stand up in any conservative caucus and say, listen, this is one job the government can do and should do to help us advance as a society.”

One job the government shouldn’t be doing is spying on Americans, Treadwell said. He expressed concern over the program, run by the National Security Agency, to collect and store Americans’ phone records. That program was made public last summer by the former NSA contractor Edward Snowden.

“The 4th amendment of the constitution says the government doesn’t have access to your papers, can’t do unreasonable search and seizure without a warrant,” he said. “Well, you know, Edward Snowden broke the law, but the fact is he told us about people who were breaking the constitution! And I’m very concerned about that. I’m a privacy advocate.”

Treadwell faces two other Republicans in the primary: former Alaska Commissioner of Natural Resources, Dan Sullivan; and Joe Miller, who beat Senator Lisa Murkowski in the 2010 Republican primary, only to lose to her as a write-in candidate in the general election. The primary will be held on August 19, 2014.