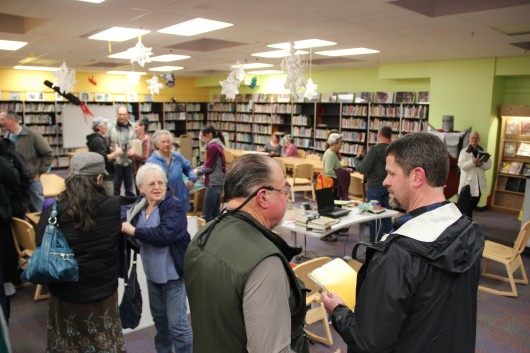 This month, eighth graders at Sitka’s Blatchley Middle School will see a new class added to their schedule: comprehensive health education, including basic sex ed. The state doesn’t require the class, but educators feel strongly that middle school is the time to address healthy relationships.

But some parents object to how the school has handled the program.

Comprehensive health education can cover everything from nutrition to bullying to substance abuse — and, of course, human sexuality, including issues like abstinence, birth control and sexually transmitted infections. The State of Alaska doesn’t require health education in middle school, and until this year, Blatchley didn’t offer it. That came as a surprise to some parents.

“I was surprised to find out that there was no sex ed going on, no real health curriculum going on at Blatchley,” said Kristen Homer, whose daughter is a 7th grader at the school.  “And that the 8th graders had had no education about sex since their 5th grade puberty class.”

Homer is a nurse practitioner and works at Sitka’s Mt. Edgecumbe High School. Last year, she and several other parents approached White to push for some kind of health curriculum at the school. Homer ended up teaching a three-day class for 8th graders in the spring.

“We talked about, you know, it’s pretty basic: anatomy and physiology, what are the body parts, what do they do, how does the menstrual cycle work, how do people get pregnant,” Homer said.

This year, the school decided to implement a more comprehensive health class. Starting this fall, 7th graders took a course based on a national curriculum called the Teen Outreach Program, or TOPS.

But because health education isn’t mandated by the state, Blatchley didn’t have the funding to train staff in the curriculum. So White looked outside the school for a teacher. The State of Alaska offers grants for nonprofits to have staff members trained in the TOPS program. In Sitka, the nonprofit that received the grant was the local branch of Planned Parenthood.

White stressed that Planned Parenthood had no role in writing or developing the curriculum – they just received a grant to have a staff-member teach it. But for most of the parents present, that was beside the point.

Lisa Melnick has a daughter in the 6th-grade at Blatchley.

Melnick and others argued that having a staff member from Planned Parenthood teaching in the school amounted to a tacit approval of the organization’s national agenda, including its support for abortion rights.

For this spring, Blatchley has discontinued TOPS. The health classes are all voluntary, and student participation in TOPS dropped to about 48 percent, White said, due to a combination of families opting out of the program, and students choosing to take PE, which was offered at the same time.

So this spring, only 8th graders at Blatchley will take a health class.

The 8th grade curriculum is called “The 4th R” (as in, reading, writing and ‘rithmetic. The “fourth r” is for relationships). It will be taught by Blatchley’s two PE teachers, along with Elena Gustafson, a staff member at the nonprofit Sitkans Against Family Violence.

White stressed that the curriculum covers a whole range of issues.

“I would disagree on that,” said Peter Melnick, whose daughter is a 6th grader at Blatchley. “It doesn’t need to be a component. If this is not mandated, we should be able to choose. Because there is no law, there is no legislative action here. This is a choice that the school is making. We should be able to choose what is being taught to our students, to our children.”

“And you do get to choose,” White said.

“That’s kind of a logical fallacy to say that it is needed,” Melnick said.

“And I would argue until I am blue in the face with you –” White said.

“And I would argue back,” Melnick said.

“Being a middle-school principal,” White said. “Knowing that we have kids who are sexually active, knowing that that’s a reality for many of our kids, and knowing that they do not have access to the information to protect themselves, it needs to be a component. Now, that being said, I fully respect a family’s choice to deal with it on their own terms with their kids as they see fit. However, I can’t base my decision for the entire student body on fifteen families or twenty families that I know are on the ball.”

White emphasized that students can opt out of any individual lesson, or the entire class.  But most of the parents present said that sex-ed simply doesn’t belong in middle school. In the words of one mother, teaching anything other than abstinence “is like handing them the tools to do the exact thing we’re trying to stop.”

Others stressed that sex ed should happen within the family. Charles Horan doesn’t have a child at Blatchley; but he was asked to attend the meeting by fellow members at St. Gregory’s Catholic Church. And he spoke for many in the room when he said, “You can’t discuss human sexuality in a moral or ethical vacuum.”

Principal Ben White said that in an ideal world, the state would just mandate health education in middle schools and fund a dedicated health teacher. Until that happens, he said, Blatchley will keep trying different options – and, he said, he trusts that parents will keep offering feedback.