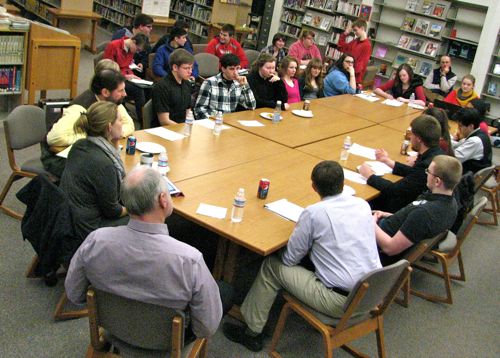 Common Core math was also on the agenda in a joint meeting between the school board and the student government of Sitka High School. But it was trumped by other issues raised by the high school students.

The hour-long work session took place prior to Tuesday night’s (2-4-14) regular meeting of the school board.

In an interview with KCAW following the discussion, Owen Fulton said that students were not especially concerned with the transition to Common Core; rather, they wanted a more active role in policy decisions — in all aspects of their educations.

Fulton said he did not feel that the school’s current Math curriculum was substandard. He hasn’t taken the SAT’s yet, but he said he did “okay” on the Math component of the PSAT.

Other issues the students brought forward included holding a health summit in schools to mirror Sitka’s Community Health Summit, and the implementation of a hot breakfast program.

An often-raised objection to hot breakfast is that it would require altering morning bus schedules. Fulton told the board that some schools had solved this problem by serving hot breakfast after first period.

And an issue that has long been a concern of parents is now on students’ radar: fees for extracurricular activities. Students said that air travel to events was creating an economic divide in school.

Annemarie Pike spoke with KCAW after the meeting.

“I was actually pretty nosy. I went to a bunch of friends — people I didn’t know very well — and I asked. And I didn’t encounter one sport where somebody didn’t say, It’s more expensive this year, it’s more difficult to pay. And that affects everybody differently, but I think everybody hates having to pay more. And we just felt it wasn’t fair, and we brought it up at student council. I was surprised to learn how many people identified with it, but hadn’t thought to bring it up. So we decided to bring it up with the school board. If it’s not something they can affect, at least it’s something they can be aware of.”

As an example, Pike said a recent trip to Ketchikan cost students on the Drama, Debate, and Forensics team $260 each, not including meals. She said that, until this year, that was what a student might expect to pay to go to a state event in Anchorage.

Fundraising, she said, could bring the cost down to about $200 per student. But she also was worried about tipping the scales too far toward fundraising.

“If we fundraise more than we practice through the actual activity — like with sports, if you spend more time fundraising than in actual practice, that’s not the point of the activity, I think. So having the costs so high is detrimental in a variety of ways: to the activity itself, to school, and to other things.”

Board members assured the students that they were aware of the problem. Jen Robinson noted that getting the state to increase funding for the ferry system, and develop better scheduling, was challenging, since Southeast legislators were far outnumbered by counterparts in the Railbelt.

Superintendent Steve Bradshaw suggested that the students produce a short documentary video about the problem, which board members could distribute during their upcoming lobbying trip to Juneau.