Sitkans speak out against HB77 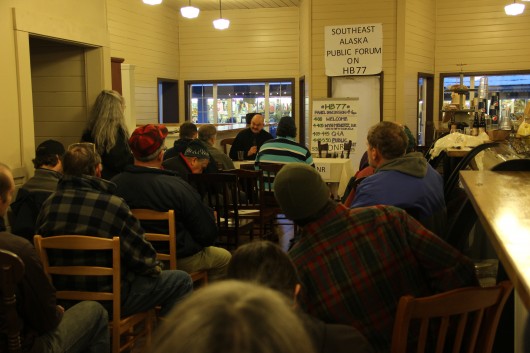 About forty people turned out for a meeting organized by the Sitka Conservation Society to discuss HB77, a controversial permitting bill before the Alaska legislature. (KCAW photo/Rachel Waldholz)

Last week (Thurs 2-13-2014), about 40 people jammed into the Homeport Eatery in downtown Sitka to speak out against a proposed law, House Bill 77. HB77 is part of an effort by the Parnell Administration to streamline the permitting process at the Department of Natural Resources. But some Sitkans are joining a chorus of critics who say the bill goes too far.

About half an hour into the meeting, moderator Eric Jordan asked if anyone wanted to speak in favor of HB77.

JORDAN: Is there anybody here who wants to speak in favor of the bill?

Nobody did. Instead, most of the evening’s testimony sounded something like this:

BAINES: The Sitka Tribe has taken a stance in opposition of HB77.
SCORZELLI: We’re against it. We’re against HB77.
HARRIS: I think the whole bill should pretty much just be scrapped.

That was Michael Baines, of the Sitka Tribe; Andrew Scorzelli of the Chum Trollers’ Association; and Scott Harris of the Sitka Conservation Society.

HB77 would make a host of changes, large and small, to the way the Department of Natural Resources permits projects on state land. Critics say the bill would severely curtail public input on resource decisions. The Parnell administration says Alaska needs a more streamlined permitting process to ease development.

“We had gotten into quite a hole with backlogs of authorizations,” said Wyn Menefee, the Chief of Operations for the Division of Mining, Land and Water at the DNR. Menefee was supposed to attend the meeting in Sitka, but his flight was cancelled because of snow. Speaking later to KCAW, Menefee said that HB77 will make the DNR more efficient.

“We’re trying to tackle that and trying to make sure that we can be an agency that can provide timely, certain and efficient authorizations for folks,” Menefee said.

But at the meeting in Sitka, speakers said the bill is an overreach.

“I think everybody has seen situations – hatcheries is a perfect example – where the permitting process can seem overly burdensome,” said Linda Behnken, executive director of the Alaska Longline Fishermen’s Association. “But overly burdensome is better than irreparable harm. ”

Speakers at the meeting worried that the bill would give the DNR commissioner too much authority, and limit the public’s right to appeal DNR decisions. The bill would restrict appeals to people who can prove they are “substantially and adversely affected” by a decision, as opposed to simply “aggrieved” in the current language; another section stipulates that only people who  participate “meaningfully” in the public comment period will be allowed to appeal.

Speakers at the Sitka meeting also raised the question of water reservations.

“Right now, individuals, organizations, tribal governments can apply for permits to protect in-stream flow to make sure there’s adequate water to meet the needs of salmon in a stream at any time of year,” Behnken said. “And that opportunity will be precluded with HB77.”

Whereas a water appropriation takes a certain amount of water out of a river or lake, a water reservation keeps a certain amount in a body of water – for instance to protect fish habitat or water quality. Right now, anybody can apply for a water reservation – including any individual, nonprofit, or tribe. The wording in HB77 would limit that right to government agencies.

Until now, water reservations haven’t been a major issue in Southeast. That’s because it applies to state land, and most land in Southeast is federal. But, speakers said, it represents what they object to most in the bill: stripping away the ability of the public to participate in resource decisions.

Menefee said that individuals can still partner with government agencies to apply for water reservations. He said this section of HB77 grew out of a worry that the reservations were being abused as a tactic to stop major projects.

“There are reservations filed on rivers for pretty much the biggest projects around,” Menefee said. “For instance there’s reservations on the Chuitna coal area, on Pebble, on Susitna Dam, on the coal development in Sutton. I mean, if you go through and you look at the different larger projects that are going along, each one of them has a person applying for a water reservation on them.”

But, Menefee said, in response to public opposition, the DNR is working with legislators to make some changes to the bill before it comes up for a vote in the Senate.

“We heard loud and clear the concerns about still allowing people to apply,” Menefee said. “So we’re trying to find language that we can address that.”

Both of Sitka’s legislators, Senator Bert Stedman, a Republican, and Representative Jonathan Kreiss-Tomkins, a Democrat, oppose the bill.

Stedman said that the bill was written too broadly, and pushed through without enough public input.

“This is a classic example where an issue is driven mainly by railbelt elected officials, in an attempt to basically drive it right over the coastal legislators,” Stedman said.

The bill passed the House last year; to become law, it has to pass the Senate and be signed by the Governor. The bill is currently in the Senate Rules Committee — in Stedman’s words,  “about one inch away from a vote. ”

Back in Sitka, Scott Harris spoke for many in the room when he said, “The people that manage public resources need to listen to the public.”

“That’s America,” Harris said. “That’s Alaska. That’s democracy. And yes, it’s harder, it takes more time, you have to find consensus among different opinions, but tough, that’s the way it needs to be if you’re talking about public resources.”