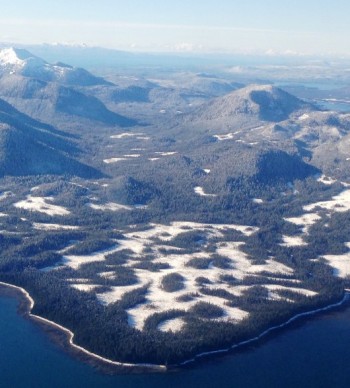 Part of the Tongass National Forest, between Wrangell and Petersburg, is seen in this view from an airplane. A Senate measure calls for the state to take over some Tongass timberlands from the feds. (Ed Schoenfeld/CoastAlaska)

Legislation urging the state to take over some Tongass National Forest lands is attracting questions and opposition.

She said the state could still select more than 5 million acres of federal land under the Alaska Statehood Act. But she said it can’t be logged.

“The state should be entitled to select some of its remaining land from the Tongass National Forest without being limited to recreation and community expansion,” she said.

The measure encourages Gov. Sean Parnell to pursue the land transfer. As an alternative, it suggests the state negotiate to directly purchase timberlands.

Judiciary committee members questioned how it would work. Chairman John Coghill, a North Pole Republican, was among them.

“It wouldn’t be a bad idea to look far and wide and see if any state has been successful in negotiating land transfers from these types of lands,” he said.

The resolution supports a larger push for increased harvests recommended by the governor’s Timber Task Force. That includes a proposal from the pro-development Southeast Conference that would free up more Tongass forests for logging.

The committee heard from fishermen and environmentalists opposed to the resolution.

One was Joseph Sebastian of Kupreanof, near Petersburg.

“It’s a feel-good piece of nonsense that is likely to go nowhere. But I really think all our time would be better served finding more real problems to deal with,” he said.

Stedman’s Senate Concurrent Resolution 2 is expected to be heard in the Judiciary Committee again within the next week or two.

The Sitka senator was asked to appear in person and answer a list of questions from committee members.