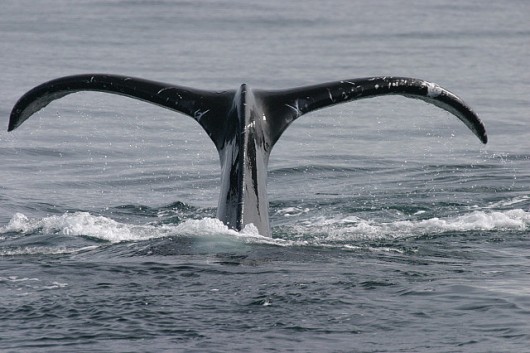 A humpback prepares to dive in lower Cook Inlet. The state wants to take the whales off the Endangered Species List. (Photo by DeWaine Tollefsrud/Creative Commons)

State officials want the federal government to remove some protections for Southeast and Southcentral humpback whales. But a noted researcher says it’s too early.

Whalers killed so many humpbacks in the 19th and 20th centuries that many worried they might become extinct.

Harvests ended in the mid-1960s when an international treaty took effect. Then, populations began to grow as governments adopted protective policies.

“This is a success story. This is one species that no longer needs the protection of the endangered species act and we should celebrate that,” says Doug Vincent-Lang, director of the state’s Division of Wildlife Conservation.

He says humpbacks will stay safe, even if they lose the act’s protections.

“Even if you delisted the species, at the end of the day, they’d still be adequately protected under existing whaling agreements and existing Marine Mammal Protection Act regulations,” he says.

He says humpbacks are numerous in waters from Cook Inlet to southern Southeast, the population the state wants delisted.

They still die of disease and old age, when hit by ships or tangled in fishing gear. But he says rapid population growth, which the state estimates at 7 percent, means there are plenty to replace them.

“Just to say you’re going to delist the central stock is almost a simplistic way of saying these whales are one big group. But really, when they come to Alaska, they aren’t,” she says.

Learn more about humpback whales and how they’re tracked.

Straley says breaking up Alaska humpbacks into eastern or western populations does not reflect their full life cycle.

Most Southeast whales winter in Hawaiian waters, though some swim to Mexico. But when they return in the summer, they split up and head to specific parts of the coast.

As that cycle repeats, they develop hereditary differences.

“You could basically wipe out a whole genetic lineage of whales if something happened catastrophically. I’m not saying that’s going to happen, but it’s a risk of ignoring that part of the structure of the population,” she says.

She agrees humpback numbers have grown. But she says the most-frequently-used estimate is based on old research. So there’s no way of knowing for sure what’s happening now.

The petition to remove the whales from Endangered Species Act listings was submitted to the National Marine Fisheries Service, also called NOAA Fisheries.

That agency has 90 days to decide whether it’s worth considering the petition. If it does, spokeswoman Julie Speegle says a full review will take about a year.

“We look at factors that may cause the population to have difficulty in the future, like ocean acidification, lack of food, that type of thing,” she says.

If the petition is approved, this population will continue to be covered by the federal Marine Mammals Protection Act. That prohibits hunting, requires habitat protections and sets a safe distance for whale-watching tours.

So what more does the species act do?

NOAA Fisheries’ Jon Kurland says it reviews any federally-funded work that could affect the whales.

“We do consultations on things as simple as coastal construction projects, revamping a port or harbor, driving piles for a wharf to broader-scale activities like seismic exploration for oil and gas,” he says.

The Hawaii Fishermen’s Alliance, which works where whales spend the winter, filed its own humpback delisting petition last April. That’s going through the review process now.

“The central North Pacific stock, which the state of Alaska is now petitioning us to designate as a distinct population segment, would be a subcategory of that. So we’ll have to look, do some checking internally here and see how these two petitions dovetail,” she says.

Wildlife Conservation’s Doug Vincent-Lang says bowhead whales are a possibility. So is the western population of Steller sea lions.

“That population is currently listed as endangered. But there’s 75,000 to 80,000 of those animals now. And we think at least a downlisting to threatened may be appropriate at this time, if not a complete delisting,” he says.

Removing a marine mammal population from endangered species protections is not unheard of. NOAA Fisheries’ pulled eastern North Pacific gray whales off the list 20 years ago. And last year, it delisted eastern Steller sea lions, which live in Southeast.