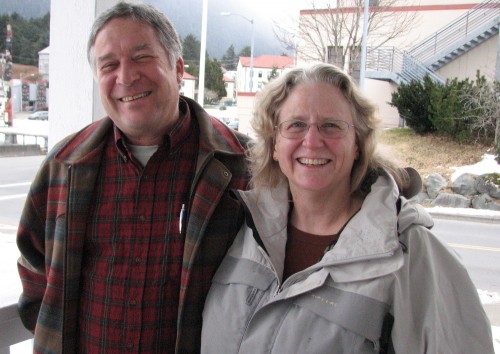 Lee Cooper and Jackie Grebmeier both received their PhD’s from the University of Alaska Fairbanks. They’ve put together exciting research careers — and a marriage. (KCAW photo/Robert Woolsey)

Two preeminent oceanographers will be in Sitka for the month of March. Jackie Grebmeier and Lee Cooper will be catching up on their writing, visiting classrooms, and mingling with the public — basically, enjoying the novelty of staying in one place for a solid month.

The pair teach at the University of Maryland, but travel regularly to Alaska — where they did their doctoral research — to visit the Bering Sea and Arctic Ocean. Grebmeier is a biological oceanographer. She’s the US delegate to the International Arctic Science Committee.

“I like to look at the coupling — the connection between processes in the water column and animals that live in the underlying mud. Particularly ones that are fed upon by big animals like walruses, diving sea ducks, and gray whales. So I like to look at how a system works together like a big puzzle, and what may perturb it, or cause it to have some change in one way or another.”

Cooper is a chemical oceanographer. During his stay in Sitka, he’ll give a presentation on radiation from the Fukushima disaster, and other changes in the ocean that are of major concern.

Like Grebmeier, Cooper also looks for connectivity in his work.

“We have a program where we study certain productive communities along the way where gray whales, walruses, spectacled eiders feed. And we’re looking at the organisms on the bottom, and tracking the status of those communities, because in some cases, the number of animals and how much they weigh decreases. And so there’s some concern about the system changing, as sea ice tends to disappear, particularly in the Chukchi Sea, as we’re going into the Arctic Ocean proper, the amount of sea ice is changing and that’s having some profound impacts on the biological communities.”

Grebmeier and Cooper have worked out an interesting partnership, in research and in life. They are married, and have been for a long time. Grebmeier says she’ll cook, if Cooper washes the dishes. Cooper also does most of his work in the daytime, and Grebmeier takes the late shift on research cruises, when the Coast Guard and other agency vessels they travel on are quieter.

The couple is in Sitka on a fellowship, which is in its third year of funding from the National Science Foundation.

The Sitka Sound Science Center’s research director, Tory O’Connell, says the fellowships are good for the visiting scientists, and build relationships that are important to her organization’s mission.

“Sitka has a lot to offer in terms of research and logistics support. We have a hope that we’re going to be a preeminent marine and terrestrial biology field station.”

And O’Connell says there are long-term benefits for the community. She herself is a retired groundfish biologist with the Alaska Department of Fish & Game. She believes the Scientist in Residence Fellowship can help steer kids in a good direction.

“We learn a lot. We expose others to us, and then the students here get to see what the future can hold, if they keep on a science path.”