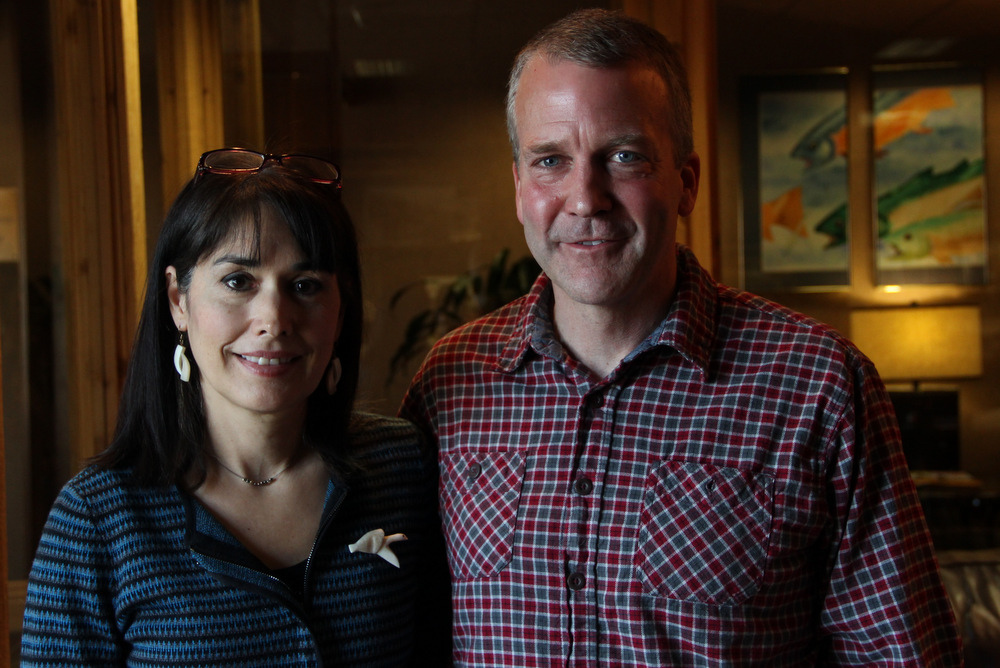 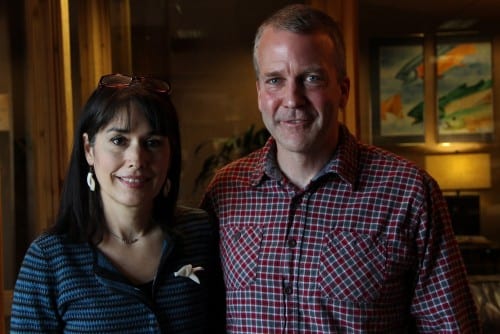 Republican Senate candidate Dan Sullivan was in Sitka this weekend to speak at the Sitka Republican Women’s annual Lincoln Day Dinner. Sullivan, a former Commissioner of the Department of Natural Resources, is hoping to challenge incumbent Democrat Mark Begich, who is up for reelection this fall. Sullivan faces several Republican rivals for the GOP nomination, including Lt. Governor Mead Treadwell, and the 2010 Tea Party champion, Joe Miller.

Sullivan sat down with Sitka reporters to talk about his role in challenging President Obama’s healthcare law, the perils of over-regulation – and that time he swam against the Navy’s military dolphins.

The first time Sullivan visited Sitka, over a decade ago, it was in a very different role.

“We were the guys swimming against the dolphins,” Sullivan said.

That would be military-trained Navy dolphins. Sullivan has been an officer and reservist in the U.S. Marine Corps since 1993.  He first came to Sitka as part of Northern Edge 2000, an elaborate military training exercise that many Sitkans remember, in part, for the Navy dolphins that were temporarily housed in town.

The dolphins were trained to find enemy swimmers who might be, say, planting mines on a naval ship. During the exercise, Sullivan and his marines played those swimmers — which is how he found himself in a dry suit in Sitka Sound, with dolphins swimming towards him. Then, suddenly, those dolphins stopped.

SULLIVAN: So we thought that was very strange. And then we were left, unfortunately, this marine and I were left in the water for quite a long time, like about an hour. It was cold. And finally they came to pick us up and I said, what, why did you guys leave us here for so long? What happened? And the dolphins didn’t do their job, they stopped. He said, we had to get the dolphins out of the water very quickly. We’re really sorry. There was kind of an emergency. We said what? And he said, well somebody noticed that they thought they saw a pod of killer whales, so we had to collect the dolphins real quick. And I said, you left me out here and my marine for over an hour, when there was a pod of killer whales?! And the guy looked at me, and literally he said, he goes, look, I’m sorry. He goes, we spend millions of dollars training those dolphins. [[Laughter]]

Sullivan served most recently as Commissioner of the Department of Natural Resources under Governor Sean Parnell; he resigned last fall, to launch his campaign. Before that, he served as Alaska Attorney General for a year and a half under then-Governor Sarah Palin.

During that time, Sullivan was one of the state attorneys general who sued the Obama administration over the president’s healthcare law.

“When that was passed, I grabbed a small group of attorneys, and I said, hey, before we decide whether or not we’re going to challenge this, let’s figure out what it is. Let’s read it!” Sullivan said. “I’m not going to say I read every word. It’s a big, thick document. But we spent weeks –weeks! — reviewing that law.”

Sullivan ended up recommending the State of Alaska join the suit, arguing that the law was unconstitutional.

In the end, the Supreme Court upheld most of the law, but Sullivan said he’s proud that the Court accepted one argument at the heart of the suit — that the federal government could not force states to expand Medicaid, the healthcare program for the poor. Medicaid expansion became optional, and this fall, Governor Parnell announced that Alaska would opt out, citing its cost.

Sullivan said he supports the governor’s decision, and continues to oppose the law, which he argues has done more harm than good.

“Are there elements of that bill, for example preexisting conditions, that I think are positive – yes,” Sullivan said.  “But [look at] the overall direction of what that has done and how that has harmed Alaskans.”

Democrats argue that popular elements of the bill – like banning discrimination based on preexisting conditions – depend on the less popular elements, like the mandate that everyone carry health insurance and subsidies for those who can’t afford it.

During the interview, Sullivan aimed much of his fire at President Barack Obama. He said he believes the President’s policies are stifling the economy.

Sullivan said that, if elected, his top two economic priorities would be reducing overregulation, and increasing energy development.

Those are both issues Sullivan dealt with at the state level. As Commissioner of Natural Resources, he pushed forward HB77, a controversial bill aimed at streamlining the Department’s permitting process. Opponents argued that the bill limited public participation, and it was shelved by the legislature earlier this spring.

But Sullivan said he thought the overall effort had been on the right track, citing the backlog of permits at the agency when he arrived.

“Two thousand five hundred backlogged permits that we were sitting on as a state – just at one agency!” Sullivan said. “Some had been sitting around two, three, four years! And to me again, this was an issue that was very, very harmful to small businesses in Alaska – growing the economy, employing people.”

Before his time as attorney general, Sullivan worked in various roles in the Bush administration and U.S. military. He served as U.S. Assistant Secretary of State under Condoleezza Rice from 2006 to 2009. From 2002 to 2004, he served on the staff of the White House National Security Council. In between, he spent two years on active duty as a staff officer to General John Abizaid, who was then overseeing the wars in Iraq and Afghanistan.

Sullivan said his experience in the military put veterans’ issues at the top of his agenda.

“There are areas, with regard to wasteful military spending, that we clearly can make some important cuts,” he said. “However, spending on our veterans should not be an area where we try to balance the budget. Balancing the budget on the backs of our veterans, and the benefits they’ve earned, is not where I would be, in terms of being a U.S. Senator.”

Sullivan has taken heat for his years in Washington from outside groups supporting Senator Mark Begich, who have run ads arguing that Sullivan hasn’t spent enough time in Alaska.

Sullivan is originally from Ohio, where his family runs the publicly traded company RPM International, and is prominent in Republican politics. He moved to Alaska in 1997.

The Senate primary will be held on August 19. The General Election will be November 4, 2014.