How to haze an eagle 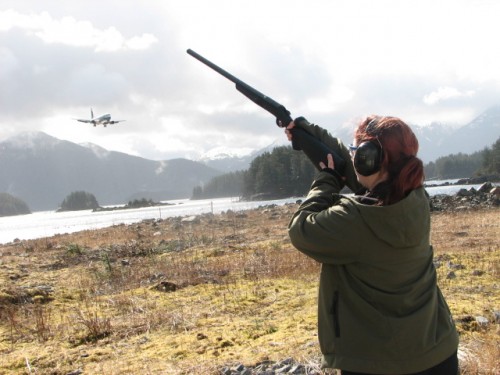 At most major airports someone is paid to chase birds off the runway. But at Sitka’s airport that job is especially challenging.

That’s because 3/4 of Sitka’s runway is surrounded by water. Fish spawn along its banks, attracting hungry birds. That problem was highlighted four years ago when two Alaska Airline jets collided with eagles on takeoff. Dave Tresham is the expert who came in afterwards to make sure the runway is safe.
Listen to iFriendly audio.
Snarge. That’s the technical term Dave Tresham uses to describe unidentifiable bird debris. Avoiding snarge is the goal. It’s also the reason he’s speeding up and down Sitka’s runway 30 minutes before the noon flight departs for Ketchikan. He spots some loafing eagles at the end of the runway and stops the truck.

“So now we have two eagles,” Tresham said. “So, the more you leave the birds alone the more they will show up.”

Tresham chooses a small hand pistol loaded with pyrotechnic shells aptly called screamers. Screamers tend to work best on eagles – who don’t fear much at the top of the food chain. Because when triggered, the screamers spiral wildly and shoot sparks. That’s what it takes to rattle an eagle. 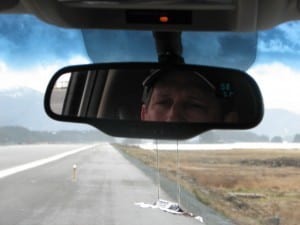 Dave Tresham is in charge clearing Sitka’s runway of wildlife that might interfere with flight departures and arrivals. (KCAW photo/by Emily Forman)

Tresham is a U.S. Department of Agriculture wildlife specialist stationed at Sitka’s Rocky Gutierrez Airport. He notices patterns in bird activity at a very micro level. He has his eyes on every tuft of grass, puddle, and critter.

Tresham: Many times I’ll spend an hour, two hours picking up bugs and worms up off of the runway.
Forman: Really you’ll go to that level of detail?
Tresham: I have pictures of night crawlers. There’s an isopod it’s called a rock loas. That is supposed to stay within a few feet of the shore line. And I’ve picked up literally hundreds of them out towards the center of the runway.

Tresham has been modifying Sitka’s causeway since 2010. In August that year, an Alaska Airlines flight was forced to abort takeoff when a bald eagle was sucked into its left engine. That same week the replacement plane also hit an eagle on takeoff. No people were injured, only fowls, but after that, Tresham was hired to come up with a long term plan for deterring wildlife from making the Sitka runway home. That includes things like filling in still water with gravel or trimming down tall patches of grass.

Forman: So, is there basically a Dave Tresham at every airport?
Tresham: There’s many. Yes. We probably have close to 30 USDA wildlife specialists working the state of Alaska alone.

Tresham’s career path started with the Aleutian cackling goose. His first wildlife management job was removing an invasive species of fox that was preying on the cackling goose to the point of endangerment. He’s devoted a lot of time to kicking animals out of places where they shouldn’t be, but he loves wildlife. It’s tough love.

“I just show up for work even when I’m not working because it’s nice to see the birds the populations,” Tresham said. “Just look at the scenery you have whales and sea lions. Where else can you do it?” 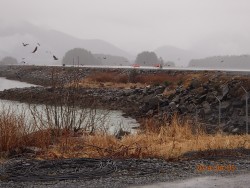 “You’re like where is the wildlife person! I see birds!” Bauscher said. “Why isn’t anyone doing anything about that!? Hahaha!”

They are both much more comfortable on the ground – a stone’s throw away from a 737 as it’s taking off. Because that’s where they have the most control.

“We have to the south three to four maybe five eagles flying through those trees. From this distance those birds have felt that bangers going off.”

A banger is used with a 24 gauge shot gun. It’s a longer range shell than the screamer. Loud and resonant.

“…and if anything starts coming in this route I’ll be talking to the pilot to let them know where the birds are at.”

Tresham can literally change the course of a speeding plane minutes before it lands.

“So we have eagles above him eagles below him eagles in front of him,” Tresham said. “So we’ll be talking to the pilot 5-7 miles from the airport if we can see them saying, ‘Hey you’ve got eagles.'”

And the very last resort is what Tresham calls a lethal take. He says he probably chases away close to 80 thousand birds a year in Sitka. And he relies on the lethal take method a lot. It’s usually a glaucous winged gull that just doesn’t get the picture. But, endangered species are off limits.

The noon flight to Ketchikan is almost ready to depart.

Tresham: And there’s a safe departure.

And in Sitka, there’s another successful takeoff – without a fragment of snarge in sight.