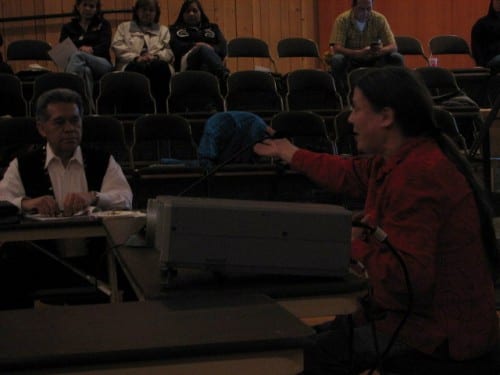 Listen to iFriendly audio.
Although he has never worked for a tribal government, Spottedbird spent 34 years working with tribes and Native American entrepreneurs on business and economic development.

Spottedbird: Gunalcheesh, Chairman. And thank you also to the Tribal Council and to the people of Sitka. I feel already welcomed to this community. So I’m really looking forward to working with the Tribe and now that I’m on the tribal government side I’ll have to learn the protocols and the governmental part of management.

Throughout the meeting, many community members – both tribal and non-tribal citizens – presented on a range of issues.

Makinen: I feel that our language our way of life, everything is important. And we need the young people to know our culture. Maybe they’ll never catch on to be fluent speakers but they’ll know about the culture. They’ll know who they are where they came from.

Gorman: I just wanted to formally introduce myself to the tribe and let you know my door is open to you all. We are meeting on a regular basis with the tribe in formal meetings. We are very looking forward to our government to government meeting in the next few months.

Part business part social, the point of these meetings between the tribal and municipal government is to build relations and discuss areas of joint concern.

A number of tribal citizens also addressed the Council. Some expressed concern over the delivery of Indian healthcare services. Others demanded a better process for handling and maintaining sacred burial sites.

When asked what are the Sitka specific issues that he’s most eager to address, Spottedbird mentioned the importance of language and cultural preservation, year-round jobs for tribal citizens, and showcasing Tlingit culture to attract tourists.

For now, Spottedbird says his door is always open. And welcomes any opportunity to listen and learn about what matters in Sitka.